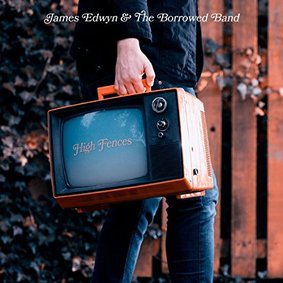 'High Fences' is an album of jangling and sometimes chiming guitars, good songs, strong melodies, and excellent lead vocals that are further enhanced by the sublime quality of the harmonies. I'm even reminded at times of the Jayhawks, although this excellent band's harmonies may be even better than Minneapolis's finest, but with a much sharper and more expansive edge, one on which the song is more important than a polished production! Not that the production isn't excellent on this album; it most certainly is, but this band always has that edginess whether ballad or mid tempo country rocker. In a simple phrase; they are an already excellent band that will in all probability get even better.
'High Fences' is only their second full length recording and although I've yet to hear their debut, 'The Tower,' it received plenty of positive reviews and a lot of radio play so when added to the strength of this current release their future looks to be filled with promise.
The Glasgow based sextet consists of James Edwyn on vocals and acoustic guitar, Emma Joyce, vocals, Scott Keenan plays keyboards and vocals, Ronnie Gilmour, electric guitar, Ross McLaughlin on bass and Neil McDonald handles drums and percussion. All of the ten songs were written by James Edwyn with the exceptions of Taking liberties on which he worked with Scott Keenan and Get back up which was credited to the whole band. The songs are often uplifting and full of great melodies from this band who know how to create an epic expansive sound quite naturally without increasing the density of their sound.
The album opens with Passing San Ysidro, a really strong song that is enhanced by the bands sense of drama that further lifts this and most of the other songs on this recording above their already excellent status. At times the sound is a little too dense and elements feel as though they could possibly be a little lost but the playing and the vocals are so good and the guitars so melodic it doesn't really matter. It is immediately followed by Try not to think of now, a composition that includes a nice piano and an uplifting melodic guitar sound with a little slide and solid percussion. It is an excellent ballad that often includes 'chiming' guitars on a tale that rolls along seemingly effortlessly but still with its sense of drama intact thanks to the excellence of the arrangement and the series of peaks and troughs throughout. Quoting Sagan has a simple acoustic guitar intro soon joined by percussion, piano and the excellent lead vocal on a song that rises and falls across a broad expanse from beautifully melodic to a more hard driving, heavy texture and back again with no loss of quality and with something always interesting going on. Finally, Taking liberties has a powerful sense of the dramatic on this haunting unusual song that has hints of big balladry mixed on occasions with an almost grungy guitar sound with the usual, and by this stage of the album the expected, high quality vocals and harmonies.
Stylistically the band are working in an incredibly crowded field in which anything hugely original is almost impossible to find. Having said that, it could be argued that if a band performs their own music it is original, something that James Edwyn and the Borrowed Band can justifiably lay claim to. The difference between them and many similar bands is the consistency of quality in that their arrangements are very cleverly put together, the songs are strong, the playing excellent and the vocals would be difficult to improve upon, putting them in a position in which they are no doubt the envy of their few peers. This is a tremendous album by a band I feel are just beginning to spread their wings and explore their capabilities and who will no doubt gradually become recognizable to more and more music fans as their songs and sound grows ever more expansive.