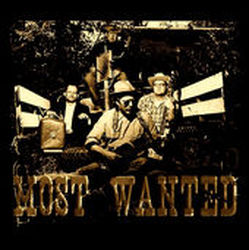 RT ‘n’ the 44’s – Most Wanted (Self Released)
RT Varlines voice has the power and character of the late great Johnny Cash, allied to which he is no mean songwriter. The band instruments are constructed from scrap but sound excellent on this sparse compilation of tracks from six of their eight album releases. The sound quality varies as befits a genuine do it yourself band but the music and that voice leave nothing to be desired other than more music from this great band! There is plenty of darkness but also humour on this hugely entertaining compilation that in many ways evokes the spirit of the great JC but is far more than a country mile from caricaturing him!
http://www.rtnthe44s.com/


The Blind Owl Band – Rabble Rousing (2012)
If I had discovered this album at release time it would have got the full review treatment, been album of the week on my radio show and in all probability would have featured in my albums of the year. Apparently they put on an incredible live show which comes across on this studio recording that is the epitome of ‘good time hillbilly music,’ on which they really hit their groove and are so obviously having a great time! A friend felt it was a little repetitious at times but that is more than made up for by the fire, power, passion and sheer musical ability exhibited on these excellent band originals, all played as if an old hillbilly band had been transported from 1930 to the modern day. Incredible album! An added bonus is that they have a new album out which I am about to investigate.
http://theblindowlband.com/

Matt Woods – With love from Brushy Mountain (Self Released)
Matt Woods sings with a raw but incredibly melodic vocal style that plants him firmly in the melodic classic country music genre but a million miles from the formulaic sanitised version that actually seems to have less and less appeal for listeners. There is plenty of passion on the gorgeous ballads and a tremendous fieriness on several terrific country rockers. There is no holding back on this album of a dozen beautifully conceived and performed songs.
http://www.therealmattwoods.com/home

The Mallett Brothers Band – Low down (2011)
I wish I had discovered this album 3 years ago when it was released. Still, there’s another one due out in the new year and if it’s half as good as this tremendous album i’ll buy it! This is their second release (the new one will be their 4th) and contains music that virtually defines rock and country with it’s incredible mix of songs that blend the various styles, with individual songs being reminiscent of straight ahead rockers, high lonesome hillbillies, 1970s country rock, pure old time country, even an occasional bluesiness but all put together to make a hugely satisfying listening experience! Can’t wait to see what they do with the new album!
http://mallettbrothersband.com/

Porchlight Smoker – Water to sand (At the Helm/Dead Reckoning)
This is the third album release from a hugely talented band who thanks to their pretty much equal blend of British and American folk/country music have a unique but highly addictive sound. Their all acoustic instrumentation enhances the varied songs (and one instrumental) by this four piece band made up of two Englishmen, a Scotsman and an American, all multi talented singers and songwriters who just seem to get better with each subsequent release. They are just as good live as on record and as their sound has developed, thanks to their talent and variety, they have gradually evolved a sound that is recognisably The Porchlight Smokers. Great band, great album!
http://www.porchlightsmoker.com/
(Full review to follow)

The Bones of J.R. Jones – Dark was the yearling
You will not hear a better debut album than this tremendous offering and it is by one of the most talented and  original artists around. He is a multi instrumentalist who plays his own original bluesy hillbilly music, (and much more!) in some ways Canned Heat for the 21st century? Really that comparison is irrelevant , J.R. is stylistically very much his own man and this album is essential listening for anyone who claims to love roots music! . http://www.thebonesofjrjones.com/

I Draw Slow – White wave chapel (Pinecastle Records)
This is a stunningly beautiful album that blends Irish and American folk music, often in the same song, into a gorgeous and unique stew. Twelve of this talented quintets own all acoustic songs and an extraordinary cover of a trad ‘old timey’ song signals (to me at least!) the emergence of a band who are apparently becoming hugely popular in the U.S as well as Ireland. Lead vocalist Louise Holden not only has a beautiful voice but is also able to inject a depth and edginess into many of the songs she sings. This is their third album release and if their previous offerings are even half as good as this you will need to purchase them when you buy this beauty of a recording!
https://idrawslow.wordpress.com/

Roger Wallace – That Kind of Lonely (2001)
It beggars belief that a man with this much talent is not a superstar and when you take into account that he has only released four albums in fifteen years the situation becomes farcical. He has the backing of a superb band, is a songwriter of huge ability and is the possessor of one of the best country voices around, with the ability to inject a little edginess that far removes him from formulaic ‘country pop.’ All four of his albums are tremendous and still available so you can buy them all thanks to the fact they are all of equal superb quality!
http://www.reverbnation.com/rogerwallace

Hardin Burns – Down the deep well (Ithaca Records)
This is an album of sparse mellow music, with some excellent original songs and one cover, driven in the main by some exquisite and tasteful guitar playing as befits a man with the talents of Andrew Hardin. He takes lead vocals on a couple of tracks but most leads come from the lovely voice of the Burns Sisters, Jeannie Burns, whose feminine vocals express a range of emotions on these songs that are a blend of country, folk and blues but without ever actually having any of those labels firmly affixed. A high quality ‘roots’ recording by a duo whose talent is there for all to hear.
http://hardinburns.com/

Goodnight, Texas – Uncle John Farquhar (Self Released)
For blending alt. Country, old timey, ‘straight’ country, folk and even an appealing bluesiness this is one of the best albums i’ve heard for a long, long time. The songs are great, the two male lead vocalists as good as anyone around, the playing is excellent as are the arrangements and harmonies and to top all this off there is a distinct edginess to many of the songs. This is the bands second album and if they can consistently achieve this standard,  success should be guaranteed. I’m playing the album over and over again and still can’t believe how good it is!
http://www.hiwearegoodnighttexashowareyou.com/
Full review to follow

Jim Keaveny – Out of time (Self Released)
A brilliant album by a tremendously talented singer songwriter whose roots are in country music but is not in any way restricted by the label, often overlapping into many other roots music sub genres. His vocals are incredibly evocative and stylistically he is a true original who consistently ploughs his own quite addictive musical furrow on this new recording as well as his previous four albums. Buy this quite uplifting album and then work your way backwards!
http://www.jimkeaveny.com/

Old Testament – Old Testament (Self Released)
A dense full sound that works well with the evocative vocals on this excellent alt. Country debut album by a band based in Los Angeles. Plenty of chiming guitars that propel this wash of melodic sound, with a nice edginess that at times becomes quite bluesy and spooky, even including a little psychedelia.
http://oldtestament.bandcamp.com/album/old-testament

Ryan Boldt – Broadside ballads (Dahl Street)
Listeners can be forgiven for thinking this has the feel of a stripped down Deep Dark Woods album because Ryan Boldt is the lead singer and songwriter with that great band. This is a gorgeous debut solo album of nine slow moodily sparse traditional folk songs that is far more than a stopgap before the next DDW album. Boldt proves what a great vocalist he is with these heartfelt and sublime versions of these old songs.
http://thedeepdarkwoods.com/

Ben Hunter & Joe Seamons – Take Yo Time (Self Released)
This is an incredible album of old timey folk/hillbilly music and old rural blues that never differentiates between the two, even including a little early jazziness These two hugely talented men are not only excellent performers but also have as much feeling for the music as anyone has ever had. This should be an album by which all other latter day recordings that include songs from both genres are judged. I doubt that many will be better.
http://www.hearthmusic.com/blog/hearthpr-american-songsters-ben-hunter--joe-seamons.html