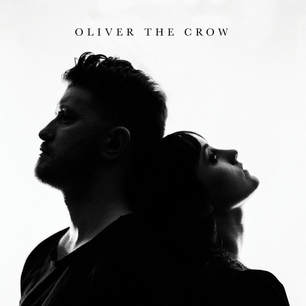 The hugely talented duo of Oliver the Crow defy all attempts at finding a generic folder to slot them into, thanks in the main to the often otherworldly, unique music they make. When I say impossible to slot into any genre I should qualify that statement by adding 'other than their own unique, haunting style;' a style that treats what in other hands could variously be modern pop songs, haunting old time folk, new folk, even chamber music and goodness knows what else.
The duo consists of Kaitlyn Raitz on cello and vocals, with Ben Plotnick on fiddle and vocals, both of them being classically trained musicians, something that is reflected in the quality of their playing, similarly their writing and arrangements. However, this recording is a long from being an album of 'classical music,' although some may well argue that in the not too distant future it may well achieve 'classic album' status, such is the quality of everything the ear perceives and the uniqueness of the treatment of the ten songs on this quite addictive disc.
Of those ten songs, four were written by Ben, one by Kaitlyn, one by Regina Spektor, another by Kaitlyn  in conjunction with the hugely talented Rachel Baiman, one by Rachel and Natalie Schlabs, one by Rachel Baiman, Kaitlyn Raitz and Ben Plotnick and finally an incredible reading of the traditional Bury me beneath the willow. I listed all of those involved in the writing simply to illustrate the fact that none are really 'mainstream' artists, all preferring to plough their own musical furrow and hopefully achieve success on their own terms rather than through the dictates of the music industry. I should add that Rachel Baiman already seems to be achieving that success and it is to be hoped the others will follow soon if this album is an example of the unbridled talent these artists can call upon.
The duo's vocals are always excellent, with Kaitlyns beautiful haunting voice taking most of the leads whilst the dexterity and invention of their fiddle and cello playing really has to be heard to be believed. It is those deep, sometimes mournfully haunting' sounds of the two stringed instruments that really set them apart from anyone else I can think of! Many will think that just two voices supported by a violin and cello have their limitations when it comes to textures and variety but that is very far from being the case on this extraordinary album that is so chock full of original ideas and diversity.
The albums opening song will confirm to all who hear it that this recording is not only something different but also something very special. It is a Ben Plotnick composition titled Sailing with the tide and opens with the gentle sounds of the fiddle and cello as they fade in, soon joined by Kaitlyn's beautiful folksy vocal with Ben's harmonies providing excellent support. It is that combination that forms a strange otherworldly sound, one that is enhanced by the combination of fiddle and cello, something that is peculiar to just about every song on the album. At times the blend of the two instruments produces a 'classical' feeling, whilst at others there is an incredibly deep mournfulness that conversely, at least on occasions creates a strangely vibrant upbeat feel. Next up is the extraordinary 'classic' tale, Bury me beneath the willow, the instruments perhaps being a little more restrained with the blend of the two vocalists allowed to dominate as they should, on a tale that whilst having  been recorded by myriad artists over many generations, can never be anything other than impossibly sad and downbeat. It is a song that is dominated by its sad, mournful theme but no one that I can think of has ever quite taken it to these harrowing, eerie depths. On some versions a variety of treatments and instruments have been used to achieve that eeriness; not so this pair who use just their voices with cello and fiddle! Glass was composed by Kaitlyn Raitz and Natalie Schlabs and is another excellent, haunting composition, this one on which the violin on occasions sounds a little like an accordion. It meanders its melodic way through the song with the cello providing an almost percussive deep foundation with that combination allowing Kaitlyns lead vocal and Bens support to seemingly go where their muse takes them! Final mention is of the Baiman, Raitz, Plotnick penned '45' a song that opens with the haunting fiddle, then the deep mournful cello wends its way in with Kaitlyns lovely vocal providing a little lightness that is enhanced by Bens harmonies on another song that has an otherworldly atmosphere. The violin seems to go off at different 'angles' on occasions, something that often crops up on this album and helps towards providing the diversity that despite numerous listening sessions will often leave listeners unable to work out what comes next!
This is a tremendous album by a uniquely talented couple who genuinely bring new sounds, ideas and a new perspective to what will hopefully soon be very 'popular music.' It is an album that whilst being far from the mainstream none the less includes some lovely melodies, great lyrics, exceptional playing and vocals and a uniqueness that should appeal to many if only they would listen with open ears and minds. Do yourself a favour and purchase a copy; you definitely won't regret it if you're a 'real music' fan!