SCREEN DOOR PORCH – THE  FATE AND THE FRUIT 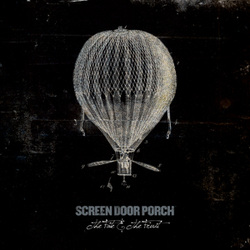 This album just about holds together under the onslaught of these various roots based styles simply because there is so much talent at work here. There is nothing on the album that could be described
as country or blues but everything is rooted in those two generic catchalls, from an old time front porch hillbilly style to sophisticated modern day bluesiness. It is an album that is almost impossible to categorise, with some of the songs being quite strange although even that strangeness is difficult to define. Maybe its just that they have a feeling of originality without actually being hugely original, although I certainly can’t think of anyone else to compare them to. Their vocals are poles apart adding power to the harmonies and huge contrasts between songs and I found myself falling for Seadar Rose’s  gorgeously expressive vocals that ranged from the languidly seductive to a punchy bluesiness. Aaron Davis’s vocals are equally expressive but a little less melodic, ensuring that each song that he takes the lead on has an appealing rawness. Their harmonies have a slight discordancy about them that gives each and every song an edginess that in many ways defines this excellent ‘rootsy’ album. I remembered that several years ago
I reviewed their debut album for ‘Maverick’ magazine and described Sedar Roses vocals as having the ‘almost languid drawl of Lucinda Williams, but with more range and expression’ and Davis’s as ‘like a Whiskeytown era Ryan Adams.’ Can’t really argue with either, although the latter is not quite so relevant to this current album.
All of the songs are written and arranged by Seadar Rose and Aaron Davis with both taking lead and harmony vocals and the
former plays acoustic guitar, mandolin and kazoogle whilst Davis plays acoustic and electric guitars, mandolin, banjo and harmonica. The album was recorded in Austin, Texas and was produced by the couple in conjunction with Britton Beisenherz, who also plays Electric bass, Rhodes and percussion.The other musiciansused on the album are not part of their touring band but are worth mentioning because of their quality and the fact that it shows the range of sounds covered on this album. They are Jeff Bryant on B2 organ, Rhodes and clavinet, Kyle Clayton, upright and electric bass and Clint Simmons plays drums and percussion. So there are plenty of variations used, but the sound is rarely too dense, even on a few tracks being quite sparse, another contributing factor to the contrasts and  unusual feel of the recording.
The split of lead vocals is six songs each and the styles run the gamut from beautiful soft ballads to updated old timey and on to a rootsy blues. The instrumentation, playing and singing is always  exceptional and the album gets under way with Devil’s Honey  with Sedars gorgeous, languid drawl and a chiming banjo together making it a haunting song that includes some interesting effects that add to the atmosphere. This is immediately followed by a complete contrast in Needle and a record  a slow strangly eerie song with Aaron on lead vocal and Sedar on harmonies with a lovely sparse instrumentation that includes acoustic guitar, harmonica and melodic electric guitar. These two entirely different songs set the scene for the rest of the album, making it pointless trying to guess what comes next. There is the slow
moody folksiness of Polka Dot Dress, some swampy guitar and Sedars vocals on the bluesy Right down to it  and an old time hillbilly feel on Wrinkled Neck Mule with Aaron on lead vocals and banjo and also includes some atmospheric harmonica and kazoogle!
This is only their second recording as Screen Door Store and maintains the high standard set by their debut album. The only real reservation I have about them being a huge success is that they are impossible to pigeon hole or fit comfortably into any genre. A huge plus for the band and us music fans but a nightmare for promoters and A & R people!