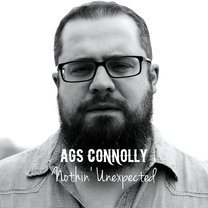 I've always been a little anti mainstream country, feeling that much of it whilst performed by hugely talented singer songwriters, or just singers, is over produced, sanitized and consequently has much, if not all, of the 'soul' taken out of the music. Ags Connolly in many ways is the polar opposite, despite having a classic country voice and a tremendous talent for songwriting. The huge difference is in the production, with the relatively minimal instrumentation and of course the abundance of 'soul' that he is blessed with shining through, negating the need for any over production and ensuring that his music always has that edginess that is so necessary to real country music.
I suppose it shouldn't be really, but it is quite astounding that a man from Oxford, UK has such an incredibly natural feel and talent for what can almost be described as 'country and western,' although 'Ameripolitan' seems to be in current use as a description and has the feel of suitability! It's not just the steel guitar and fiddle that gives him that classic sound either. I saw him play live when all he had was his guitar for accompaniment but he was still just as much country as he is and has been on his recordings. It is above all, that voice, one that can be favorably compared to the top American country singers of the present day and the past, which defines his quality, whilst his songwriting is on a similar level.
A measure of the high regard in which Ags is held can be gleaned from the list of musicians who helped out on this album. Ags handles all lead vocals as well as playing guitar, with multi instrumentalist Stuart Nisbet playing just about anything with strings including various guitars, lap and pedal steel and mandolin. Kevin mcGuire was on upright bass, Jim McDermott, drums and percussion, Andy May, piano, Eamon McLoughlin played fiddle and  viola and Michael Guerra played accordion on two songs, giving them a lovely Tex-Mex flavour, with Dean Owens adding backing vocals and glockenspiel as well as being the albums producer.
The ten songs on this tremendous recording are beautifully written snippets that reflect on a variety of life's situations, some relating to lost love but with a slightly different angular approach, as well as tales of 'bar life' and change. Of the ten songs, nine were written by Ags, the exception being Loudon Wainwright III's I suppose, a tale that in Ags hands takes on the classic 1950s/1960s feel of someone such as Charlie Rich, actually improving on the original. There is a clarity and integrity to each of the ten performances on this exceptional album and it is probably the latter that gives the recording its authentic edginess, not in terms of rough edges but more in the depth and believability of the songs.
Other than picking them randomly it was impossible to pick a few favourites, simply because these songs are so varied and of such quality that all are equal, at least to me. Album opener I hope you're unhappy gets going with steel guitar, fiddle, bass and percussion, leading Ags expressive pure country vocal on this easy loping mid tempo ballad that has such a desperate love based theme, hoping the lover who ditched him is as unhappy as he is on a tale that could have come straight out of the honky tonks of old. When the loner gets lonely has a gentle acoustic guitar intro, joined by Ags powerfully expressive vocal and the restrained, beautiful accordion on a sad tale of a loner, the song creating and capturing the powerful emotions tied up in the tale. next we move on to Neon jail, a tale that has a strong western swing/honky tonk feel as it sails along at a foot tapping mid tempo with piano, bass, percussion, fiddle, guitar and an excellent harmony, with the intervention of the occasional twangy electric and steel guitars. Finally, there is a steel guitar intro with thudding bass and restrained percussion on Haunts like this, a tremendous honky tonker, with some excellent 'barrel house' piano on an edgy song that has an authentic mid twentieth century atmosphere, something that Ags seems able to conjure at will. In fact, it is that edgy authenticity that sets him apart from many of the modern day 'smoothies,' almost feeling as if the recordings were made in the early days of honky tonk, before the music was subjected to any sanitization.
It is impossible to praise Ags Connolly's 'classic country voice' and indeed this album highly enough. He really is a match and more for Nashville's finest, although the big difference between him and most of his American 'peers' is that he is also a talented songwriter. That is a combination that should guarantee a hugely successful career but as we know talent doesn't always bring any guarantees with it although if the Nashville money men don't pick up on this man it will be country music and country music fans who will be robbed of this rare talent.