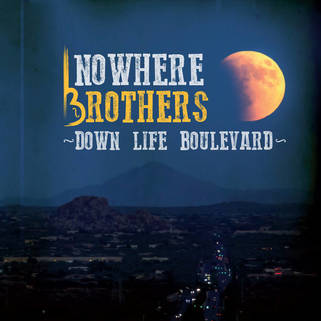 A chance meeting and jam sessions in Trieste, Italy in 2005 and a shared passion for roots music was the start of a great friendship and the birth of the Nowhere Brothers duo. The pair lived on different continents, one in the U.S the other in Europe and both had to work at day jobs to earn a living, so arrangements of rehearsals were always going to be fraught with difficulties! They stuck at it, sometimes only meeting for a week or two each year, and finally this, their debut album, came to fruition and was released in December 2017. So, was it worth the effort and sacrifice? The answer is a resounding 'yes' and marks what really should be the start of a long and fruitful career, although hopefully we won't have to wait twelve years until their next release.
The Nowhere Brothers duo consists of Nick Ventolini on vocals, harmonica and penny whistle and Roberto Fiorelli, vocals, guitars, stomp box and piano. All ten of these beautifully flowing songs were written by the pair although some additional lyrics on Montenegro diaries were added by Alberto Sisto and the album was recorded at Pyramix Studios in Phoenix, Arizona, a location that gives a clue to how they came by the incredibly arid, sparse spaciness of the production.
Every song on this quite stunning album moves at just above a funereal pace, emphasizing the beautiful arid desert atmosphere and whilst the sound is deep and full, strangely it is also incredibly sparse with the arrangements so carefully conceived that there is always a variety of textures and atmospheres, keeping things interesting from start to finish. The slow tempo of each song never grates, instead helping to create an atmosphere of depth and almost extreme moodiness, in some ways having a similar atmosphere to the 'Paris, Texas' soundtrack and even on occasions a 'spaghetti western' feel.
Both men are excellent vocalists as is their playing and as one song flows gracefully into the next the impression is created that the pair met up in a wide open spacy environment and recorded the album in one continuous session. Whilst the slow tempo rarely changes, the emotional content, degree of passion and  sheer depth of these songs varies considerably bringing more than just a touch of diversity to the recording, with the cleverly varied instrumentation and guitar changes creating the illusion that a lot more instruments have been used than actually have. The warm haunting sound of the often used, although never excessively so, harmonica adds a further depth to the rich atmosphere of this album that I started out liking and ended up loving!
An acoustic guitar introduces us to the albums first song, the appropriately titled, Nowhere Brothers, very soon joined by a harmonica that almost has the restrained feel of an accordion. That leads to an excellent, dominant vocal on a perfect album opener, with the eventual inclusion of the dobro providing further texture on an exceptional song. The gentle acoustic guitar and lovely dobro lead both vocalists in on I am one, another excellent song that has, as with most other songs on this album, a dry, mellow, incredibly spacey atmosphere with harmonica and occasional gentle piano filling the sound out and creating a depth that you wouldn't think possible given the sparse instrumentation. The lovely sound of the dobro and harmonica get things underway on Montenegro diaries before the lead vocal comes in on another slow moody song, but despite the gentle pace of the album the arrangements seem to create great variety from song to song. A little percussion adds to the sound along with occasional harmonica and again, as with most songs on the album, the vocals are so strong that the attention is held and the small changes provide a greater diversity than the reader might think. There is a percussive guitar sound on the intro to Stillness with a chiming melodic guitar next to it leading to the vocal with a spacy harmonica coming in a little later, in fact the vocal also has a distinct spaciness to it as on some of the other tracks, as if being sung in a vast cathedral creating an echoing arid, desert feel.
To cap it all, the melodies are warm and appealing with some genuine 'earworms' attached to these winsome, if often powerful, tales of longing for freedom, home, love and peace, all sentiments that have been expressed countless times before though rarely on such an evocative collection of songs.