JOHN CRAIGIE - NO RAIN, NO ROSE 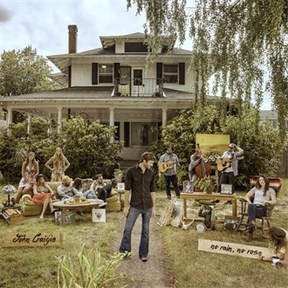 By my reckoning this is Portland, Oregon based singer songwriter John Craigie's tenth album in a career that includes three live recordings and one album that contains acoustic versions of Led Zeppelin songs. For me 'No rain, no rose' is the best of what I've heard so far, although all are excellent and contain a variety of themes and tempo's on his mainly lyric driven songs. That is not to say there is anything wrong with the melodies. All are excellent and are spread throughout all of the albums of his that I've heard, this one in particular and there are quite a number of 'ear worms' none of which are harmed by his warm, incredibly expressive vocal style.
The relaxed easy going versatility and warmth of his vocals enables him to master a variety of emotions and song types from light and easy to heavy and dramatic, all of which are included on this excellent album that even includes a very good cover of the Rolling Stones Tumbling dice! It's unlikely that anyone investing in this recording will have heard an album that is so varied for a very long time, albeit a recording that is loosely rooted in a folksy country style that has a relaxed communal atmosphere, in part due to between songs banter. He is part of a Portland community that includes Gregory Alan Isakov, The Shook Twins and Tyler Thompson and Jay Cobb Anderson of Fruition all of whom helped out on this recording, which goes a long way towards explaining the warmth of that banter. It does give the recording a good time feel of friends playing together and enjoying each other's company which no doubt they were, although some may find that aspect of the album inessential. I did occasionally find it a little invasive but again, it does add warmth and a collective spirit. The thirteen, mainly self penned, songs are thematically and stylistically varied with most around a slow to fairly sedate mid tempo and there is an excellent flow to the sequencing of the tracks.
The album gets under way with the excellent Virgin guitar a song that starts with just acoustic guitar and an understated vocal from John for company but gradually builds in its intensity and power. His voice takes on a completely different timbre on Highway blood, a slow moody song that includes some lovely atmospheric harmonies, acoustic guitar and piano allied to an understated bass as the instrumentation gradually thickens up and the song takes on a slightly more dynamic feel than that with which it started.  Bucket list Grandmas is a much more up tempo song that has the dynamism and gritty texture of the young Bob Dylan. There are electric guitars, piano, bass, percussion, mandolin and John Craigie's hard driving manipulative vocal, with some excellent sympathetic harmonies. There are mandolin, banjo and fiddle on the tremendous Michael Collins that give the song a folksy/hillbilly feel on an excellent story that also has an incredibly catchy melody and on which the 'support' cast excel with their harmonies and playing on a song on which John's vocal is shown at its best and most evocative. Finally, there is a sparse acoustic guitar backing with beautifully melodic 'communal vocals' on Live with less with some gorgeous interventions from the dobro adding to the warmth of the atmosphere.
Whilst I haven't heard all of John Craigie's albums those I have are all excellent so treat yourself to this recording and I'm pretty sure that as soon as you hear it you will want to work your way back through its predecessors, exactly like I am!