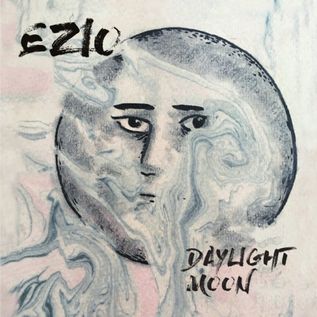 Music writing is a strange 'discipline,' particularly if you work within the confines of a small genre or sub genre. You think you've at least heard of most bands, certainly if they are within (an albeit lengthy) driving distance of home and if they have made multi albums and are a very good band surely you must have heard of them, right? Wrong! Until receiving a copy of Ezio's new album 'Daylight Moon,' I had never heard of them. That not only shames me but is also incredibly frustrating because this album is so good I can't stop playing it, added to which this is their ninth studio recording alone! There have also been four live albums and at least three D.V.Ds so I have a lot of catching up to do with this duo that sometimes fill their sound out with other musicians and are based in Cambridge
There is a complete lack of artifice or self consciousness in the writing and performances; just plain and simple great 'roots' songs, beautifully sung and played, with some tremendous melodies that quickly work their way into the listeners memory. They often seem to be promoted as a 'folk band' but as is usually the case, this short description, whilst understandable sells short a band that has so many strings to its bow and such capability in its blend of styles that include rock, folk, country, blues, a little jazz, even an occasional, but appealing, poppiness! All of the above are present in varying degrees along with various other generic offshoots and yet the whole album holds together and flows beautifully. I think it will take a huge number of listening sessions before any listener becomes confident and familiar enough to predict what comes next on an album this varied.
They are incredibly strong rhythmically as well and there are some tremendous melodies ensuring that everyone who hears the album is bound to find songs that appeal whatever their musical taste
The warm incredibly expressive lead vocals and equally expressive acoustic guitar work of Ezio Lunedei will hold appeal for anyone who hears this tremendous album, irrespective of musical taste, whilst the incredible lead electric guitar dexterity of Mark 'Booga' Fowell is astounding in its command of styles. The arrangements have a powerful dynamism that gives every song, regardless of simplicity, a strong sense of power and quite often an intense spookiness. There is even a little orchestration at times (track 3) that brings a little diversity and appeal, and that from someone who doesn't like to hear lush strings on anything unless it happens to be fiddles!
Their songs range from simple acoustic tales to electrified country rockers as well as songs that lean towards a timeless folksiness, ensuring enough diversity for even those with the shortest of attention spans. It is impossible to pick out a song or two as examples of what can be expected because of the diversity but the album gets under way with a lovely melodic mandolin lead as the only support for Ezio's excellent and manipulative lead vocal on Hey little girl, getting this collection off to an upbeat start with an 'ear worm' melody
A chugging electric guitar and heavy percussion completely change the texture on the following song Indian but Ezio's vocal is the constant that keeps things connected. This is a much heavier but still excellent and melodic song performed by people who know exactly where they are going with their stylistically varied songs and knowing they have the chops to pretty much go in any musical direction they choose. There is a gentle acoustic guitar start on Dirty little secret, an intensely dramatic tale that stretches through various twists and turns, having the dramatic quality that evokes Nick Drake. There is an occasional intervention from the electric guitar and suddenly half way through there are orchestrated strings that fit perfectly into this song, bringing a deeper sense of drama and texture to the story. Final mention is of The Gypsy song a tale perfectly evoked by the arrangement with the 'Gypsy' jazzy fiddle leading into Ezio's equally jazzy vocal on yet another excellent song. The bass and percussion underpin things and allow some beautifully flowing melodic guitar sounds free rein on a song that extends the range and scope of this bands expertise almost to infinity!
Not too many albums will be released this year that include such diversity of tempos, textures or varied generic leanings whilst still having the flow of a recording that sticks rigidly to a particular genre. There will be just as few releases that can match Ezio's latest recording for quality as well so get yourself a copy and keep your eyes peeled for them to be playing in your locale. I certainly will be!