JONATHAN WARREN AND THE BILLY GOATS -
BLESS MY SOUL
​​ 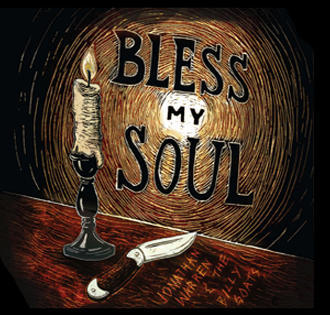 Jonathan Warren and the Billy Goats music is often described as “progressive psychobilly folk-grass,” in fact i've seen them descibe themselves thus, but, at least to me, if you buy this album expecting whatever that description means to you I suspect you will be surprised. You won't, however, be disapointed because i can hear why this music was described in that way but, as is often the case, there is so much more involved in this extraordinarily unusual recording that has elements of all the above and much more! In fact to those elements can be added a little honky tonk colouring and an often strong alt. country edge, with perhaps a little folksy jazziness and even at times a vaguely eastern European flavour and yet few of those styles excersise any sort of domination whatsoever. It is just the often unusual arrangements that create those 'echoes' of comparisons.
I usually try to come up with a few names that artists remind me of but can think of no one in particular to compare this highly original trio to. Even Warren's excellent, expressive vocal is reminiscent of no one else and he seems to have the ability to get a great depth of emotion out of every sylable and with a strong sense of 'edginess.' There is nothing cloying or sweet on the album, despite it's often mellow atmosphere, with one or two songs seeming to have a powerful orchestration despite the sparse instrumentation. It's that sort of album; strong songs, even stronger performances and vocals that, as you would expect, are perfectly suited to these band original songs, all of which have a great depth that often creates a strong haunting atmosphere
There are just eight tracks, clocking in at just a little over half an hour but it is a rewarding half hour that is easilly repeated over and over again without any signs of boredom setting in. That is due mainly to the fact that none of these songs  are limited to a single tempo and often the intrumentation can almost imperceptibly change, not always instantly noticeable thanks to the subtlety used in changing the colour and the fact that in most cases the listener will be completely lost in the world that each song creates. This is the Boise, Idaho, based trios fourth full length album, the trio being comprised of Jonathan Warren on vocal, guitar and upright bass, Dave Sather-Smith oncello, guitar and vocals, and Austin Clark onviolin, guitar and vocals.
The instrumentation on album opener Quite like you lady gives the song a quite haunting, epic feel on an excellent composition that thanks to the edgy vocals and harmonies has an otherworldly feel, with great support from a lovely melodic guitar, keyboards, percussion and bass. The fiddle and acoustic guitars support Warrens vocal beautifully on Bless my soul with beautiful wispy female harmonies and gorgeous melodic guitar on another song that has an otherworldly atmosphere enhanced by those harmonies and the fiddle. It is very much a question of being the sum of its parts, with everything on a hugely dramatic tale enhancing everything else, with a quite haunting instrumental break that adds to the already deep and powerful atmosphere. Be there for me is a terrific song,  with an evocative lead vocal and harmonies perfectly supported by the banjo, bass and percussion, then further colour is added by the inclusion of a melodic electric guitar with this being possibly the nearest song on the album to the 'alt. country' sub genre. Down the lion (feat. David Henry) has more of a contemporary sound on a song that includes percussion, mandolin, violin and several different tempos. Although overall there is very little that is contemporary with this talented band that has such an unusual take on music that is ultimately country but only loosely so, the song is eventually taken over by a powerful orchestration that sometimes seems superfluous but at others emphasises the songs power, dependant on the listeners mood at the time.
I should say here and now that all of those various styles mentioned are vague impressions and that everything on this album blends beautifully despite the fact that I've probably given the reader the impression that these sometimes disparate elements can't fit together. Believe me, they fit perfectly! This is most definitely an album that almost defines the term 'a grower.' I just didn't get it on first listen. I still don't all of the time but it is certainly repaying me for sticking with it and it is fast becoming a recording that I really wouldn't want to be without.