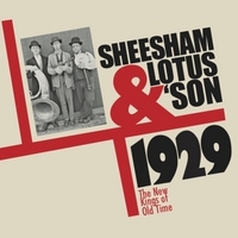 
Add some crackles and pops to the sound and you could be listening to an ancient recording by one of the old time bands that blended vaudeville, hillbilly, rag time and ‘race music,’ such is the quality of this trio’s playing and their all round immersion in those old genres. In many ways it is a fallacy to describe a band that keeps within the limits of just one of those old genres as ‘authentic,’because anyone wanting to eke out a living from playing music in the U.S in the early decades of the 20th century had to diversify. Charlie Patton, known by many (including me!) as the ‘Father 0f the blues’ didn’t only play the blues, or as it was then known ‘race music,’ but also included some bawdy‘hokum’ as well as the popular ‘hits’ of those days. Just playing the solemn old blues at a Saturday night dance on one of the plantations would very soon have led to the termination of the performance, perhaps even the performer! After a long hard week of working the fields, what people wanted was something light and entertaining to take their minds off of
their problems for a few hours, hence the diversity. Similarly, the same could be applied to the remote‘hollers’ of the Appalachians where the poverty of the poor white people was just as grinding as that on the plantations. Suffice to
say Sheesham, Lotus and Son would have had plenty of work back in those days, thanks to their mastery of all of these genres.
This tremendous trio of Canadians consists of Sheesham Crow on fiddle, harmonica, kazoo, whistling and vocals, Lotus Wight, tenor and five string banjo, kazoo and vocals and ‘Son Sanderson on sousaphone, an instrument that goes a long way to giving this album it’s ‘jug band’ sound. All arrangements are by the trio and the whole album is recorded in mono, live off the floor through a single G7 tubular microphone. Some may argue that this is taking the ‘authenticity’ too far, but ultimately what does it matter? Certainly many of the old timers would have liked to use the modern day recording technology, with the recording equipment used back in those days being Spartan by comparison, but it could be argued that if this band of ‘throwbacks’ feel comfortable with the equipment then why not use it? The sound is quite distinctive and other than a few of the old bands from the 1920s and 30s their sound is like no one else I can think of.
Their raw musicality creates an incredibly evocative atmosphere and because of the lyrics of some of the songs a humorous element is rarely far away. That is not to say this is a comedy album, far from it. It just seems that they are a band that can bring an authentic tongue in cheek feel to the songs that have a slice of humour, although to make an album of this quality a tremendous degree of skill and concentration is required, as well as a natural feel for these decades old songs, something there is an abundance of with their instrumental prowess and the raw untutored vocals. Speaking of the songs, album opener and title track, Sam Allison’s ‘1929’ pretty much sets the scene for what is to follow with it’s vaudevillian bluesiness, the raw evocative harmonies, banjo, sousaphone and kazoo ensuring there is no doubt about the musical content of this hugely entertaining album. Next is Keep It Clean, an excellent version of the old blues singer/guitarist Charlie Jordan’s bawdy song, complete with authentic atmospheric sousaphone giving a heavy bassy jug backing that contrasts well with the banjo and fiddle, as well as the, as usual, atmospheric vocals. Next we have Jackson Stomp an instrumental written by Cow Cow Davenport, the old time blues, jazz and vaudevillian musician, with hard driving fiddle and banjo, underpinned by the sousaphone. In the case of the ‘classic’ Drunken Nights, this version is probably played as the song was intended to be played, again backed up by the bassy sousaphone with sawing fiddle, banjo and what sounds very much like two drunken singers doing their best to blend their slightly discordant harmonies on this tale of an aggrieved drunk! Daniel  Williams of the legendary East Texas Serenaders wrote the groundbreaking instrumental Mineola Rag, a tune
that blended early Texas swing with what would one day be known as ‘bluegrass.’ Naturally this trio’s version includes the sousaphone on the fiddle driven, incredibly evocative recording that thanks in part to that sousaphone, exhibits a similar originality to recordings made eighty years ago.
Although the songs, instrumentation and the recording techniques are as old as the hills this is an album that is incredibly refreshing, bringing a depth of feeling and a lightness of touch that few if any others can match. In fact, it is their blend of instruments and techniques that gives this album a degree of originality that is surprising on a recording of such old and in many cases often recorded songs. Now to investigate their first two albums!