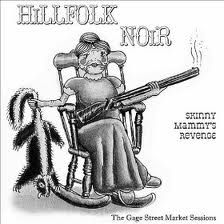 I really should be getting on with reviewing more recent albums than this one that was released in early December 2010, but when you stumble across recordings this good it seems absolutely essential to inflict your views on others. As I write, I know they are releasing another album in the near future, but having seen very few reviews of this tremendous recording decided to add my feelings to the miserly amount so far written about it.
The album consists of traditional/public domain songs, blues, hillbilly, folk, a little ‘hokum’ even a few with the writers credited, although most are as old as the hills. All of these various  styles are blended together to make an album that holds together brilliantly thanks to the excellence of the talented people involved. Those people are multi instrumentalist Travis Ward on resonator guitar, harmonica, kazoo and lead vocals, Mike Waite on upright bass, Alison Ward on singing saw, washboard, banjo and harmony vocals and Jared Goodpastor on snare, washboard, tambourine and harmony vocals. The instrumentation should give an indication of the type of music on offer and they certainly deliver an album of raw acoustic ‘old time’ music. There seem to be many more bands playing this form of music than there were in the later decades of the 20th century although it’s probably more likely  that 21st century media formats give them a greater access to listeners and vice versa. Whatever the reason, most that I have heard in recent times seem to have absorbed their various influences and produce music that at least sounds authentic.  That word ‘authentic’ is a moot point and is often replaced by ‘copyist’ but it is essential to take into account the amount of feeling that is put into the performance and any originality, changes or reinterpretations. It’s much better to accept that some of the music from the early days of recording was so good that it is worth keeping alive, as are the singing styles and instrumentation. (Handels ‘Messiah’ is on occasions still performed as it was several hundred years ago with very few changes, as is most ‘classical music!’)
Hillfolk Noir take songs from the already mentioned genres and put their own indelible stamp on the performances. There are very few albums that are underpinned by resonator guitar, snare, bass and ‘singing saw’ but this one is and gives the music a haunting element that enhances these old songs. Wards vocals have a raw old timey feel to them and his mastery of the resonator guitar enables the band to draw everything together into one generic pot. The other excellent instrumentation brings variety and colour and avoids any of the saminess than can sometimes happen with this style of music. I can’t remember any other album on which singing saw is used on most of the songs but in Alison Wards expert hands it actually has character rather than just being of novelty interest. Her excellent harmony vocals blend well with husband Travis’s in an authentic slightly discordant way and again, help to blend everything together on this energetic, full of life and vitality recording. There is a brilliant resonator guitar driven version of the Jean Ritchie ‘classic’ L and N, and the beautiful slow mournful ballad The love I thought I’d never know, isimbued with a terrific depth of feeling, with Wards vocals being supported by a blend of resonator guitar, musical saw and upright bass. Their version of Coo Coo (The coo coo bird) is not the best I’ve heard but is a more than worthy effort and credit should be given for even attempting this old British isles song that has been recorded by so many in the past. Sail Away Ladies is a song recorded about eight decades ago by the legendary Uncle Dave Macon and Hillfolk Noir are not shamed in this company, bringing their own inimitable style to this, and indeed, all of the other songs on this excellent album.
Not everything works perfectly but that is the beauty of an album such as this. None of the songs held any fears for this terrific band; they simply play songs that they want to play and blend everything into a genre they have christened ‘Junkerdash.’ Just about as good a description as any that can be coined to define this  style of uplifting roots music. Can’t wait for the new album!