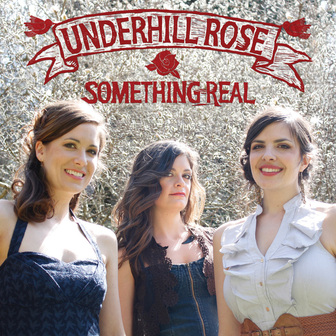 
I never criticize musicians individually but have been known to have a go at what always seems to me to be the pretty much formulaic output of the mainstreams so called ‘country music.’ If that mainstream moved a little towards the left of centre I would in all probability buy into much of that output, which is exactly where this beautiful album of very good songs, gorgeous lead
and harmony vocals and excellent instrumentation sits. What sets it above much of the formulaic is an almost indefinable ‘edginess’ that says these three talented singer songwriters have a total belief and conviction in what they are trying, so far successfully, to achieve. The fact that they had to rely on ‘Kickstarter’ to raise funds to make this, their second full album, backs up that premise and is also a terrible indictment of much of the 21stcentury music industry that puts their promotional power behind many lesser talents in the same generic field.
The talented trio is made up of Eleanor Underhill on banjo, vocals and harmonica, Molly Rose Reed, guitar and vocals and Salley Williamson plays upright bass and vocals. The first named pair contribute nearly all of the lead vocals but not always on their own penned songs, with Eleanor Underhill being the dominant songwriter, although there is a three way co write and Molly Reed wrote three songs whilst Salley Williamson penned two.
They are very much equal with all three women being strong vocalists, albeit with differing styles, a huge contributer to what sets them apart from most others and their three part harmonies are quite sublime, as is the tremendous life and vitality they bring to every song.
The album kicks off with Eleanor on lead vocal on her own composition Helpless Wanderer with a nice chirpy harmonica, banjo and dobro start allied to the gorgeous lead and harmony vocals on a song that evokes a joyfulness in the wandering minstrels life and makes a nice change to many similar songs that bemoan the lifestyle! Next is White Rose, another of Eleanors excellent songs but this time with Molly on lead vocal. There is a lovely dobro and steel guitar on a song that has a little edginess despite being about a rose bush. The edginess comes from the slightly unusual melody and the way the vocals and steel guitar combine. Little  House is written by Molly who also takes lead vocals, with a fiddle and banjo as lead instruments on a song that is evocative of ‘old time’ country
music with the atmosphere generated, allied to those gorgeous high lonesome harmonies. Something Real is another excellent Eleanor penned song, with Molly on lead vocals, and is a lovely country tale with haunting  steel
and the usual gorgeous harmonies and lead vocals on the story of someone trying to lift themselves above the mundane, something this trio will never have to do! Drives Me To Drinking is Molly penned and sung on a slow moody tale with banjo and chiming guitar on a dark sad tale of a woman settling for second best when she knows she shouldn’t and this is followed by the excellent Eleanor penned and sung Bare Little Rooms. This is a really good edgy country song, full of character and a ‘sparkiness’ that many lack, with fiddle and banjo working in unison to create an atmosphere that evokes an old timey feel. When you add the beautiful lead and harmony vocals any listener should realize this band is way above most of their peers.
Many bands of a similar style find themselves planted firmly in the mainstream and consequently suffer from a partial loss of their identity, but I think Underhill Rose have that lovely edginess that sets them apart and ensures that despite the beauty of their music there is none of that cloying sweetness that many suffer from. Something Real,’ it certainly is and long may they continue on this path.