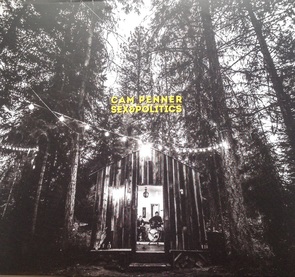 To be perfectly honest, I don't like writing a review of an album until I can actually get some sort of a grip on what is going on and some sort of an idea of what the artist was trying to achieve, rightly or wrongly. That is the major part of the explanation of why I have listened to this often extraordinary recording so many times and over a longish period. Cam Penners previous album 'To Build A Fire' was very close to being my album of the year in 2013 and it remains to be seen if this highly unusual release reaches those giddy heights. There is no reason to suspect it won't because he is still making music that is so individual and so unique that it will only slot comfortably into a no name genre of one!
Recently he has been touring Britain and the rave reports have been describing him and musical partner Jon Wood variously as 'masterful' and 'mesmerizing' amongst many more flattering felicitations!
This album was recorded in Cam's hand built (by him) shed in the woods over a ten day period by Jon Wood who helped Cam to mix the tracks, with the pair of them playing most of the instruments although there were contributions on accordion, melodeon and trombone from Scott Bayley. I suspect that many fans of bands such as 16 Horsepower will be attracted to the often dark, sinister, otherworldly atmosphere that is created by this gifted pair of musicians who wrote all of the ten eerie songs on this recording themselves. At times the sound even has the feel of Peter Gabriel's early solo albums that were so haunting and experimental in nature.
The album opener I'm Calling Out has a slow, almost funereal intro that builds with a little percussion, acoustic guitar and a melodic harmonica playing a catchy melody before Cam's breathy expressive and equally melodic vocal joins in. The song remains slow but the background density grows, taking on a slightly spooky feel gradually segueing into the next track which is titled I Believe. There is a much darker feel on this song with heavily thudding percussion building in intensity as does Cam's vocal, supported by various guitar sounds and a harmony vocal, always with the background spookiness that sounds as if it is created by a synthesizer. Clanging guitars continue to build the songs intensity before eventually fading out. There is another excellent vocal performance on Come Back To Me, a quite spectacularly emotional rendition of a pleading tale of lost love. On this song the background is considerably less dense, with chiming melodic guitar being the main support. On Hey You! (Lovers of music) the guitars and keyboards are to the fore, or would be were it not for the expressive dynamism of Cam's vocal although they and the metronomic percussion certainly add to the powerful sense of drama, and final mention goes to album closer Look Out Your Window. This is a real beauty of a slow soothing ballad that thanks to the dominant steel guitar following Cam's soft vocal could almost be considered a contemporary country song, or as close to 'contemporary as Cam Penner is ever likely to get. It is certainly though, a song that a few other artists, albeit from the edgier side of country music, might be able to pick up on!
I've made some assumptions that some of the background is created by synthesizers but it could as easily be keyboards or various other treated instruments. In some ways it is better not to know what created that otherworldly support on this tremendous and hugely atmospheric recording. It is an album I keep returning to although I still can't quite get to grips with everything that is going on. Perhaps that was their intention and that instead of trying to figure everything out listeners should just sit back and let the atmospheric music wash over them. If that was their intention, they were dead right!