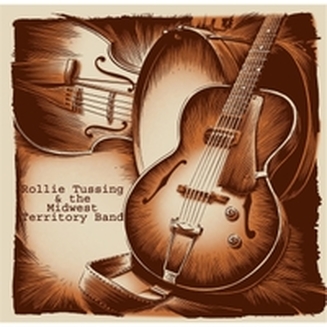 Rollie Tussing teaches people, through various outlets, to play guitar, he writes songs, tours, plays at a variety of locations and has played with some of the best left of centre musicians around. Whilst living in Portland, this winner of the National Slide Guitar 2001 competition, toured and played with his trio that included Scott McDougall and 'The Don of Division Street.' Now living in the mid west with his wife and children Rollie has another trio that includes Serge Van Der Voo on bass and Jim Carey on percussion and they call themselves the 'Midwest Territory Band.'
Rollie writes and records some of his own original songs and instrumentals as well as picking out some classic and unknown oldies from the early days of recording, songs that cover everything from 'race music,' 'hillbilly' and vaudeville putting his own 'modern' interpretation on them but, importantly, never losing sight of where the songs come from, ensuring they are still recognizable. When it comes to album releases, he is not exactly prolific, with this tremendous recording being only his second album in 17 years, the first being 1998s 'Blow whistle blow.'
This new release contains eleven tracks, of which three are Rollie penned instrumentals and one self written song,  whilst the other seven are 'oldies,' from sources such as 'trad,' Charlie Patton and the Memphis Jug Band to name a few. The oldies are entirely re-arranged by Rollie and the band whilst keeping the integrity of each song very much alive, allowing listeners to hear the songs in a way that the originals may have been heard, had they had modern day resources.
Whilst his guitar playing is at times quite extraordinary he also possesses vocal chords that have warmth and a clarity that lends itself to the songs, old and new, allowing the borders to blend to such a degree that the uninitiated would not know the old from the new. There is a subtlety and originality to the playing of Van Der Voo and Carey that blends perfectly with Tussing's guitar and vocals giving the sparse instrumentation a depth that highlights the strength of each and every song whilst imbuing them with their own style and original take.
The classic Elder Green is played and sung as a slow ballad with Rollie's vocal portraying an appealing warmth and sensitivity, with his beautiful melodic national steel guitar sound supported by a background harmonica and the restrained bass and percussion, bringing a new perspective to the classic on this brilliant new and modern interpretation of the old Charlie Patton composition. This is followed by an almost vaudevillian feel on a Rollie Tussing original, Michigan Stomp, with a chiming rock and roll feel to the guitar then joined by 'old timey' fiddle on an excellent instrumental that has a lovely light 'chirpy' feel. Their take on Satan Your Kingdom Must Come Down is incredible. Rollie's haunting guitar and a fiddle drone intro on another great modernization of an old classic. His vocal has its usual warmth but as with most tracks it is the guitar that leads, although not far behind are the other instruments that help create the deep atmosphere with this reworking at least a match for other versions. A version I have loved for the last few years was by 'Two Fingers of Firewater,' a rendering that had depth, a full sound and a fiery often sinister power and yet this matches it in power and depth, proof if needed that a song can be recreated at opposite ends of the musical spectrum and yet still keep all of its haunting power. The equally classic KC Moan is driven by the stunning National steel slide guitar sound and excellent vocal on a classic old blues song that has a lovely clean modernization but still retains the old edginess. The guitar is played at a ferocious pace on the albums final song, the Rollie Tussing original, Done Got Old, a raw blues driven on by the usual excellent percussion and a hard driving dynamic that blends this song with the oldies to such a degree that had I not had the information in front of me I could easily have thought it to be an old lost blues song that he has just found.
This album certainly adds to the ever increasing proof that old songs can be modernized with no loss of integrity and that they can be alongside new songs and blend perfectly. Rollie Tussing is a talented man who has much to offer in updating the 'old music' as well as his own originals and should be able to record more frequently than he actually has. The world should be aware of his talents and a few others like him, including his two co-conspirators, but I guess if it's not 'chart material' people are not prepared to listen. It's their loss!