JOHN MORELAND – IN THE THROES 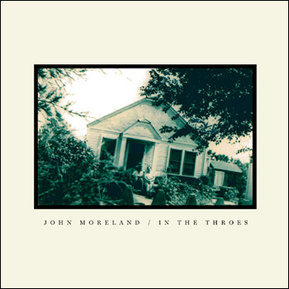 
Singer songwriter albums really don’t get much better than this. John Morelands vocals have an appealing rawness in much the same way as Bruce Springsteens. In fact although his music is different to Springsteens it’s difficult to avoid comparisons, despite Moreland being as much his own man musically as the‘boss.’ His lyrics show him up as a poet as much as a songwriter but had he gone in that direction the musical world would have been robbed of someone with huge vocal integrity.
As well as excellent vocals on his all original songs John Moreland plays most of the instruments including guitars, bass,
harmonica, organ, piano, drums and percussion,although Johnny Up plays pedal steel on a couple of songs. The album was recorded at Dogwood Recording Service, Bixby, OK and engineered and mixed by Moreland. He is certainly a multi talented musician and it shows with his assured style and deft touch that comes into play with the slower moodier songs on this varied album that has a rootsy purity that sets him apart from most other singer songwriters. Make no
mistake, he really is a hugely talented man who should be a star and mentioning him in the same sentence as Bruce Springsteen is certainly not fantastical, neither is it an insult to ‘the boss!’
There is an intensely sad reflective feel to many of the songs that often seem to be more about being unlucky in love and yet he finds the struggle to make the necessary changes to his life just too difficult. In many ways the
album is about someone who is beset with an overwhelming sense of failure in virtually everything he does or attempts to do and whilst it is predominately dark with very little optimism there are little glimmers of light, but not much. There is an air of confusion that says he’s been so beaten down by life he can no longer be bothered to continually look for the solutions or the strength to fight his way back up.
Album opener I Need You To Tell Me Who I Am is a deep and powerful tale of someone who is not only prepared to change for love but is also happy to be shaped by his lover. It is a song that whilst not overtly dark lyrically, certainly is musically on a story that has an over riding sense of confusion. This is followed by Nobody Gives A Damn About Songs Anymore and it is no exaggeration to describe this as a truly great song! It has a gorgeous catchy melody, beautiful steel guitar and chiming guitars on a beautiful descriptive song that is as true about songs as it seems to be about truth. It is in many ways a simple mid tempo song but with it’s perfect blend of instrumentation, clever lyrics and John Moreland’s heart felt vocals it is one of the songs of the year! Your Spell is another excellent mid tempo song on this album of excellent songs,with it’s chiming guitar and nice harmonies, on an incredibly descriptive tale that not only describes a love that has run it’s course but is also a good analogy for the way we move on and change, not always for the better. God’s Medicine is a song that is musically mellow but far from it lyrically, on a tale of the confusion of someone who not only knows he is going to be left alone but has fallen out of love anyway, although the song is also analgous to the way his life is panning out. Finally, Blacklist is a song that is mellow of sound with it’s nice acoustic guitar, but nothing with his raw but incredibly melodic vocal style is ever going to be all that mellow on this darkly rebellious tale!
This is an album that is a definite contender for album of the year. It is impossible to find any fault in it thanks to the brilliant song writing, the excellent instrumentation and John Morelands superb, evocative vocal style. You can’t help but wonder about a music industry that is happy to promote bland pop music, often by people that look good rather than possessing much talent, whilst artists of this enormous quality have to scrap for what’s left. I might be sticking my neck out but there is no finer singer songwriter around at the moment than John Moreland, bar none!