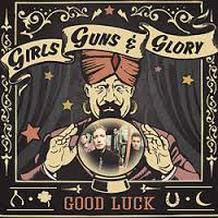 Looking back at my review of Girls, Guns and Glory’s previous album, ‘Sweet Nothings’ I found that I had thought the album to have potential but at the same time to be  flawed. The same cannot be applied to this excellent recording. In the case of this new collection, their fourth, I thinks it’s safe to say that potential has been realized fully. It shows direction, something its predecessor lacked, the songwriting is even more solid as are the arrangements and they seem to have gradually develoed a niche and a style that suits them perfectly.  There is plenty of variety in the tempos and subject matter ensuring the emotions are never allowed to settle into a repetitive groove, all in all leaving this recording way above it’s


The band lineup is the same as before, consisting of Ward Hayden on lead vocals, acoustic and electric guitars and all songwriting, Paul Dilley plays electric and upright bass as well as piano and backing vocals, Josh Kiggans is on drums and percussion, with Chris Hersch’s excellence on lead guitar and banjo plus backing vocals.

The album displays equally it’s country and its rock ‘n’ roll roots, with the two often being blended into an excellent and highly individual listening experience. Of course it helps that the band is so incredibly skilled and has a tightness that can almost be felt. Add Ward Haydens excellent and versatile vocals and you pretty much have the perfect roots music package. Those vocals, that I criticized on their previous recording, seem to be much more mature and he no longer tries, or at least gives the appearance of trying, to be Dwight Yoakam. Instead he has settled into his own natural style, as a consequence of which, he is now recognizable as an excellent and quite individual vocalist, which, with the quality of the band and his songs should ensure a bright future. The band can certainly  rock but what sets them apart from many of their peers is that they can just as easilly slow things down with the most gorgeous ‘country’ ballads, without ever upsetting the balance and flow of the album.

If ever a band updated 1950s and 60s rock ‘n’ roll it is this one. This album shows much more refinement than recordings made in those early days but still contains enough fire, drive and variety to appeal to anyone who has a liking for country, rock ‘n’ roll and all points in between!

Be Your Man has a speedy tempo that rocks nicely, almost being an updated old rock ‘n’ roll record at times. It never quite loses the country element despite the addition of brass and with Ward Hayden’s excellent vocals the song chugs along beautifully. That is followed by One Of These Days a song that has a lovely melodic guitar sound with an excellent foundation built on the powerful percussion. It is a slow moodily reflective country song with its theme, unrequited love, again with those excellent lead vocals on a tale that includes a sparky lead guitar break that eases some of the sadness but enhances the tension. There is more beautifully melodic guitar with light percussion on the gorgeous ballad Centralia’ with Hayden’s heartwrenchingly evocative vocals ensuring the songs story is memorable.  It is a true and incredibly sad tale that reflects on the rape of the land by the coal mining industry by way of a mine fire that has burned so far, for more than five decades. Come On Baby is an excellent updated rock ‘n’ roller with a powerful dominant lead guitar abetted by some tremendous percussion; not too much country in evidence but the song is excellent and shows this bands versatility. Finally, Rockin’ Chair Money starts with a nice light acoustic guitar backing with Ward Haydens lead vocal creating a classic country atmosphere backed up by light percussion and weeping steel guitar on this gorgeous ballad. They are eventually joined by some excellent electric guitar sounds that bring more drama and give an already very good song an extra lift.

This is very much an album that whilst their country elements are toned down they are still there and when allied to their rock proclivities ensures a sound that is quite individual and is becoming recognizably their own, something they have been working at since the bands inception. They are certainly not a band who stick to a tried and trusted formula and this element of experimentation combined with their obvious talent should together ensure a highly successful career as their excellence develops even further.


By way of a bonus girls Guns and Glory are on a British tour with Sarah Borges and will be playing at the Prince Albert, Brighton on Monday 20th October.