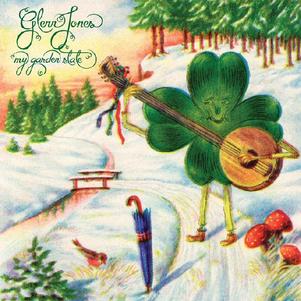 
Glenn Jones solo releases are certainly different to ‘Cul-De-Sac’ the virtually avant garde floating aggregation of  musicians he formed with Robin Amos over two decades ago, although perhaps not quite as different as would appear on the surface. He is still a great experimenter in terms of composition and tunings although his solo work caresses the music rather than attacks it.
Personally, as a non musician, I enjoy this solo work more, simply because it is easier to understand and to get lost
in the sheer melodicism. There seem to be so many different emotions inherent in these ‘songs’ that have no lyrics but are as easy to understand as if they had! There is confusion, sadness, a little anger but also small morsels of happiness on these all Glenn Jones originals. He plays within what is loosely termed the ‘Takoma school’ or ‘American Primitivism’a genre of instrumental virtuosity that sprang up around the late great John Fahey. Basically, to my ears, this is a field in which these great pickers, rather than relying on histrionics, almost make their instruments into voices that project wordless songs, somehow making them easier to understand and often encompassing the cliché, ‘less is more!’
Maybe musicians will tell me I’ve misunderstood the concept but that is how it has always struck me when listening to recordings by the likes of John Fahey, perhaps to a slightly lesser degree Harry Tausig and latterly Glenn Jones
amongst a very few others.
The album was recorded by Laura Baird who adds some beautiful banjo picking to Across The Tappan Zee and whose sister Meg, a founding member of ‘Espers’ and co member of ‘The Baird Sisters’ joins them on the eight minutes of Going Back To East Montgomery. The eight ‘songs’ are bookeneded by Chimes and Chimes II short ambient pieces that in many ways start and end the atmosphere of this gorgeous album. The already mentioned Across The Tappan Zee (a wide section of the Hudson River) has much of it’s spacy atmosphere created by Meg’s beautiful banjo playing with Glenn just providing the backing. It is followed by the, again already mentioned, Going
Back To East Montgomery, a song that has a comforting feel on which Glenn takes the lead with with some lovely melodic playing that has a feeling of great simplicity but is anything but and actually seems much shorter than it’s epic eight minutes! There is a moody bluesiness to the lovely open sound of Blues For Tom Carter, a song that contains a strong sense of drama and confusion despite that slow moodiness. The two central pieces The Vernal Pool and Alcouer Gardens were both spontaneously composed in the recording studio with the former having a tremendous sense of drama as befits a natural basin that fills with water and the song slows down as the pool slowly empties and dies until resurrected next time the heavy rains come. Quite a strong metaphor for the cycle of life really. The latter is an intensely personal song, Alcouer Gardens being a memory care home for patients diagnosed with Dementia and Alzheimers, something his mother suffers from. As you might expect from such circumstances
the song starts with the dramtic sound of rolling thunder before Glenn’s sad but lightly melodic guitar enters the story that always has a strongly reflective atmosphere. Every song on this beautiful recording evokes strong emotions despite the absence of lyrics, but who needs lyrics on an album this good.
I should add that whilst I don’t have a musicians understanding of the technicalities I do understand  some
of the complexities that getting a tune out of a guitar entails, having owned several guitars over a number of decades. A guitar is standing in the corner as I write, trembling at the thought that should I pick it up it is going to be subjected to the abuse of ten thumbs yet again, so I have enormous respect for anyone that can play well, doubly so for the few artists in the stratospheric class of Glenn Jones! Buy this tremendous album and find out just how good a master musician can be and join me in the frustration that implies!