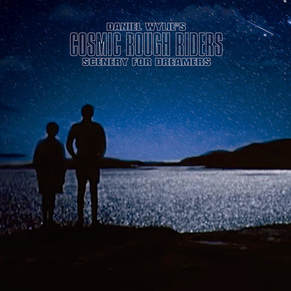 Part of the fun of listening to this terrific album is trying to recognize some of Daniels influences. So far I've come up with Beach Boys, R.E.M, early Byrds, Crazy Horse and am beginning to hear a little of the High Llamas despite having at this moment only reached track three! Don't worry though, as with other Cosmic Rough Riders albums this is no mere colour chart of classic influences; it's just that there are elements of these and probably many other bands but the album doesn't actually sound exactly like any of them; it's more a confluence of influences that Daniel has absorbed, put into the melting pot, stirred and then spilled out as fully formed unique songs in their own right. It would be better, certainly for me, if I didn't mention the word genre, but I have and am already wishing I hadn't. I've just picked up on a little folk rock but that has to be added to country rock, indie rock, rock 'n' roll ..... and ........and  ............. oh I don't know what else! Suffice to say those aforementioned genres are there but so is much more. Daniels music always has an intense and often beautiful melodicism, allied to a huge amount of musical invention and his voice is capable of just about every emotion known to man.
Being a 'child of the 60s' (o.k. a teen and young adult of the 60s if we have to be pedantic) perhaps one of the strong flavours that I can taste on this album is that of 60s American 'garage bands,' some of whom were beautifully melodic whilst others had more fire and edginess, certainly all aspects that are applicable to this excellent album. You can also add to that late 60s psychedelic bands that hadn't yet plunged deeply into psychedelia but would soon do after realizing there was no limit to what they could do in terms of experimentation. Not that 'Scenery for Dreamers' is overtly psychedelic, but there are elements of the early 'naivety' of those bands. Not that this album is particularly naive either, although there are certainly strong, fearless, experimental leanings. There, that's  enough confusion? It really is that sort of album but if you are totally confused I should put you out of your misery and just say that I'm pretty sure this quite extraordinary recording contains something for everyone, and many, like me, will love virtually everything on the album but as you've probably gathered describing it is very, very difficult, certainly for me!
It seems to me to be impossible for Daniel to come up with songs that don't contain beautiful melodies. Certainly on this album every one of the ten compositions is driven by gorgeous melodies, warm vocals and exquisite harmonies, elements that many singer songwriters would give their right arm to be able to consistently master just one of.
An edgy classic rock guitar sound opens the album with Rope (everybody lies), Daniels melodic vocal and the excellent harmonies adding depth to a song that has at least traces of R.E.M until you realize that there is so much more to a song that contains echoes of the 1960s but without being able to hang any specific names of bands on those echoes.
Cold Alaska is another song that gets underway with slashing guitars aided by heavy percussion then settles down as the lead and harmony vocals take over and then things change again to a sound that is easiest compared with the Beach boys or High Llamas although that is probably coincidental thanks to Daniels ability to quite naturally come up with these beautiful melodic sounds and the inventive ability required to absorb and then spit out his influences as something unique. There are a number of changes to the depth and textures of this song that shows perhaps more invention in it's (nearly) six minutes than many modern bands exhibit in a whole album or perhaps even career! There is a slow moody start to A gravestone without a name, with acoustic guitar and a beautifully haunting vocal from Daniel on a song that, at least to me, takes off in a similar way to someone or a band that I can't quite put a name to, maybe the High Llamas, but I'm not even sure about that! Final song to be mentioned from this stunning album is I want to kill you lover. Gently melodic guitars start proceedings leading into Daniels echoing, otherworldly vocal on what some will find a slightly unsettling tale. It has a beautiful melody but a scary and haunted sentiment made more so by the sparse arrangement and the constantly repeated I want to kill you lover. This is another exceptional melody driven song though that I don't think will cause anyone sleepless nights! The whole album has a deep, dense atmosphere, even the songs that have more of a sparse arrangement, all driven by the haunting beauty of the harmonies, Daniels sometimes otherworldly vocals and melodies so beautiful that they tug at the heart strings.
if your musical preferences are for albums that contain lush melodies full of emotional depth and able to take you away on a cozy warm bed of flowing sounds that contain at least hints of some classic influences you won't find a finer album this year, perhaps even this decade. Daniels 'cosmic' music strikes again with a recording of great beauty, depth and even a little edginess. I'm not familiar with everything that Daniel has recorded but of those albums that I do know this beauty of a recording is the best!