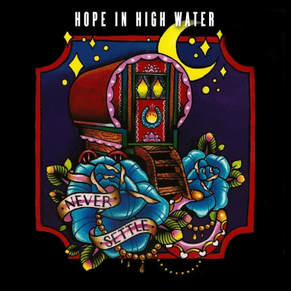 It doesn't matter how you say it Milton Keynes is not somewhere that you would expect to find a couple who are native to that area but playing raw, edgy, acoustic Americana music that could easily have sprung from the high Appalachians.
The duo consists of Joshua Chandler Morris on guitar and vocals with Carly Slade on banjo, bass and vocals, a couple who have a background, or at least part of it, in punk music, which goes a long way to explaining why there is absolutely nothing extraneous in this recording that has a distinctly raw edge mixed in with the beauty. Both are gifted vocalists but the difference in texture of their voices always keeps the listener off guard and ensures there is a strong edginess in everything they do. They are helped out on this recording by Darren Capp on drums and Luke Yates plays violin as well as having recorded the album and of the eleven excellent songs seven were written by Josh and three by Carly, with a tremendous version of the traditional gospel song Angels in heavan.
I've seen them labeled as 'a British take on Acoustic Americana' a phrase that is  difficult or perhaps impossible to argue with, although had I not known they are British I could very well have assumed their obvious intensity and passion was a product of an Appalachian childhood. It's only after numerous listening sessions that a little of the Englishness starts to reveal itself but really, labeling them is splitting hairs. The banner of American Roots suits them perfectly and naturally but as is usual with labels, non are wholly accurate; in this case there is a lesser, but still detectable British folksiness that blends beautifully with the American strain giving the duo a strong individuality that in a short period of time should make them recognizable to all. The lovely raw edginess, such as they possess, struggles to appeal to the mainstream but I can quite easily see that in this case that little something extra in their music could and should appeal to the music buying public.
What helps create the sometimes eerie edginess could very well be that punk background that they have never really lost, helping them to keep these songs real rather than sanitized as many folk albums, whether from the U.K or U.S suffer from. In many ways they are a distant echo of the untutored music of the old time 'hillbillies,' people who certainly had all of the musical skills but played in a style that was totally natural to them. There is great beauty in this album but the smooth edges have never been added, ensuring everything is kept believable and vastly superior to most of their peers, whether here or in America.
There is plenty of deep darkness and just a little light in the songs on this tremendous album that lyrically and musically has great depth, made the more so by the fact that the instrumentation is sparse, meaning a huge amount falls on their vocals to enforce that depth and edgy atmosphere, something they achieve with apparent ease.
Album opener Time shall pass has a gentle acoustic guitar intro that leads in to Josh's lead vocal and Carly's harmonies, on a song that could easily be an old English folk song were it not for the throbbing bass, percussion and banjo on this powerful folksy tale. On Who's gonna hold your hand the banjo intro changes the feel of the album and is soon joined by percussion on a song that has the atmosphere of an ages old song but is in actual fact a Josh original. It has a powerful, eerie sound, with Josh's raw lead vocals driving the song on and Carlys harmonies adding a haunting element. The metronomic sound of the banjo and percussion somehow brings an otherworldliness to the song. There is a raw but spooky lead vocal from Josh on Angels in heavan with Carly's almost angelic sounding harmonies for support with solid, dramatic percussion aided by banjo and guitar on this old traditional gospel song that has rarely sounded this spooky. The percussion fades into Forgive me, the song including a melodic guitar sound on a powerful mid tempo composition that has a strong old gospel atmosphere despite being another Josh original. The blending of Carly's vocals adds to the deep texture of the song. Final mention goes to Heartaches on hold, a song that lopes along at an easy pace with a similar tempo to some of the old cowboy songs but Carlys' incredibly passionate vocal performance rather contradicts that theory! There is a gentle acoustic guitar, restrained percussion, banjo and occasional fiddle that roots the song securely in the 'country' genre or at least a sub genre but which sub genre? Ultimately, who cares it's a great song and performance?!
What an incredible album! At times the English folksiness is close to the surface but the overall impression is of a sometimes spooky, haunting album of great 'Americana' songs and music. If their songwriting continues to produce songs of this quality and their arrangements continue to include that raw, haunting edginess, as I said earlier it won't be long before they are recognized by the masses and achieve the rewards that go with that acceptance. Roll on their next release, but at least we can continue to enjoy this tremendous album until, and probably beyond, that day.