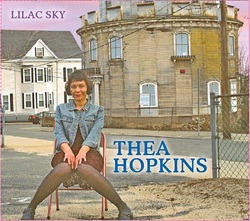 
Thea Hopkins is a prize winning lyricist and a writer of gorgeous
melodies that in many ways are a throwback to the 1950s and beyond, with an ancestry of Wampanoag and Cherokee native Americans so it is no real wonder that she is very different to most others with musically generic similarities. Whilst this six song mini album is in many ways close to mainstream country her unusual but expressive vocals and her all round individual style push her away from the middle towards the boundary. Not exactly alternative country but with a lot more soul than most of what can be found in the country charts.
The band that gives beautiful support on this album consists of Tim Ray on piano, Peter Parcek, guitar, Mike Piehl on drums, Paul Kochanski, bass and Susan Cattaneo adds some beautiful harmony vocals. Whilst Parcek is known more as a blues guitarist (he was a Blues Foundation awards nominee in 2011) it is his playing that cements the twangy country feeling that is so prevalent throughout the album.
Four of the songs are written by Thea with help from current guitarist/mandola player, Andy Hollinger, and former guitarist, Cameron Peterson. There are two covers, both of which are very good and highly individual versions of Marianne Faithfull and Barry Reynolds When I Find My Lifeand Linda and Teddy Thompson's Do
Your Best For Rock and Roll and add nicely to the flow of the album.
This short but very sweet album opens with Might’ve Stayed In Memphis a nice melodic mid tempo country song with lovely harmonies courtesy of Susan Cattaneo and , tuneful guitars on a song about being away from home for too long! This is followed by the title track Lilac Sky an excellent mid tempo country rocker and a highly descriptive tale of lost love, with as usual a terrific country guitar sound with Thea’s excellent vocal and again the gorgeous harmonies of Susan Cattaneo. As already stated the two covers are both excellent, but for me, the best song on the album is Watcha Gonna Do. The song is a tremendous protest ballad about a town deserted by the money men and the varied responses of the townsfolk all sung and played with conviction and and a lovely  melodicism.
It’s always difficult to judge an album on just six songs, particularly when you are unfamiliar with the artists previous work, which in the case of Thea consists of two albums. What I can say is that she is obviously a highly
skilled singer songwriter, who recently won the prestigious ‘American Songwriter’magazine's lyric writing contest for the title track from her previous album Chicasaw, and has her own very individual and strongly appealing
style. Probably says it all really!