Brock Zeman - Me Then You 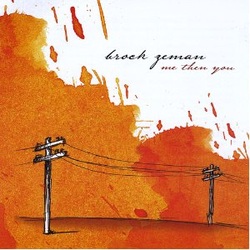 Brock Zeman is one of those artists that is always placed under the singer songwriter banner, but is also an artist that is let down by the term, there being so much more to his music that blends what is predominately left field country with small, but substantial amounts of blues and roots rock. He seems to be a man that is just a little under the radar for mainstream to take much notice of, but I’m sure if they did they would be as hugely impressed as those of us that have followed his career. Basically, this is his ninth album, with one of those being a live acoustic recording and each and every one is well worth owning, consisting as they do of excellent writing, instrumentation and his full of character, gravelly vocals that on occasions can sound like a young Tom Waits. This current album is another addition to that catalogue of excellent recordings, but is also one that seems to improve with every listen, something that doesn’t happen with your average album.
Originality is always something that is difficult to gauge, although in Zemans case there is no one I would really care to draw direct comparisons with, despite certain songs being reminiscent of various other artists. It’s probably true to say that within the ‘roots’ genre there is very little that has never been done before, but Brock Zeman definitely has his own individual style of doing things, coming at certain subjects from slightly different angles. For guide purposes putting him in a vaguely similar territory to someone such as Fred Eaglesmith is not too much of a stretch, just don’t expect them to be too much alike!
This recording in particular contains some gorgeous and memorable melodies irrespective of whether the song is medium or slow in tempo, showing his considerable talent to it’s fullest.  He has a highly descriptive writing style that covers plenty of territory including lost love, life on the wrong side of the tracks, deep love and even the end of the world! The album starts with Push Them Stones a really good twangy dark rock song with excellent backing and instrumentation and those young Tom Waitsian vocals! There are several high quality ballads with Light In The Attic, being slow and moody with beautiful steel guitar and tells of the sorrow in missing an ex lover, whilst End Of The World is summed up by it’s title. Until It Bleeds is a mid tempo, highly evocative song from the perspective of a man falling apart after his true love has left him and contains some nice harmonies on the chorus with jangling guitars and steel guitar in the background. Triple Crown is a terrific mid tempo country rocker about a seedy little Texas bar and it’s inhabitants from the persective of one of the musicians that plays there, again with nice chiming jangly guitars and on Claws there is a slightly sinister intensity and a really strong bluesiness. Virtually every song on this excellent album works really well, although the epic closing track Rain On The Roof #2, clocking in at over nine minutes, could perhaps have benefitted from being a little shorter, although many will think this is just splitting hairs and to a degree it is.
All in all a terrific album that makes you wonder how he is not already a household name, but he is still only around thirty years of age so there’s still plenty of time hopefully.