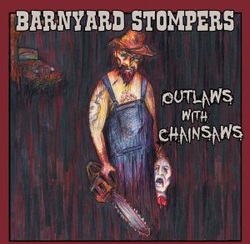 
For anyone of a sensitive nature who has a liking for the mellow side of country music it’s not inconceivable that this won’t be an album for you! Conversely, if you love, raw, edgy tales of of murder, mayhem, booze and drugs that don’t always take themselves too seriously you won’t find better this year! You will probably never hear an album as rooted in the sinister ‘backwoods’ as this one, to such a degree that at times you can feel in danger just listening to this raw often threatening music.
In many ways the songs are at times contradictory, ranging as they do from wild, ferocious backwoods mayhem to tremendous Johnny Cash evoking performances. Despite the fact that there are just the two of them working together it seems insulting to call them a duo thanks to their ability to actually make more noise then many a four piece band and when it comes to sheer musical power and drive, they have few peers! The ‘duo’ consists of Casey Miller on guitars, banjo, harmonica and lead vocals and Megan Wise on drums, percussion, rhythm guitar and vocals. It almost goes
without saying that this unique couple don’t take themselves too seriously, but it’s just as obvious that they take their music very seriously thanks to the highly skilled guitar mastery of Casey and Megans drumming, added to the
original and highly individualistic songwriting. The pair have worked together in bands such as the Hillbilly Hellcats and the Bop Kings and decided to work as a duo so that they could combine outlaw country, blues, rockabilly and deep dark hillbilly into a stew they call ‘Backwoods Twang.’ This is their second recording as the Barnyard Stompers thus giving the lie to the ‘that difficult second album’ syndrome.
Album opener and title track Outlaws With Chainsaws perfectly paves the way for much of what is to follow with the frenzied intro of a terrified victim being pursued by a chainsaw wielding maniac whilst the lyrics to the song could almost be offset by the tremendous twangy guitar and the pneumatic drum sound were it not for Casey Millers scarily raw aggressive vocal performance. White Trash Family is a terrific‘rockabilly’ song about the family from hell, with Casey’s vocal not a million miles in timbre from some of the deep voiced greats of old, although this song probably goes a little further with the rawness and criminal activities than many would have dared. Megan’s drums are almost restrained and she adds a tremendous harmony vocal on the chorus, not quite sending them into‘country  duet’ acts territory, but showing a nice slice of variation. Whilst the song often has a tongue in cheek feel, it tells a fairly common tale but does so brilliantly, showing that this couple are more than capable of playing high quality country music (almost!) completely straight! Falling Down is another excellent song, with the amazing guitar sound adding a strong melodicism to a dark tale, with that guitar sound becoming denser and muddier as the intensity builds on the story of someone trying and failing to give up his drug fuelled life style. Spooky! We are even treated to a tremendous instrumental in Choctaw Outlaw a tune that starts with a tremendously powerful repetitious drum sound matched by Casey’s deep edgy twangy guitar that gives a ‘spaghetti western’ atmosphere. This is followed by another melodic guitar start on Topless Tuesday an unusual rockabilly song that includes another slightly tongue in cheek story but with some of his best and most melodic guitar playing and with the raw gravelly vocals at their best and most threatening! Finally, Shallow Grave includes some tremendous, atmospheric banjo playing allied to an almost sinister bass drum thump and occasionally twangy guitar on a dark tale of murder on which Casey plays the vocal straight on this quite brilliant and highly descriptive gory country song!
This is genuinely an album that i’m enjoying more with every play. Whilst I’ve talked about ‘tongue in cheek’ attitude this is certainly not a comedy album, in many ways caricaturing the characters in the stories. The songs and attitude are raw and uncompromising, with some exceptional guitar playing that shows tremendous variations and the percussion laying a powerful foundation. Casey’s vocals range from Johnny Cash depth and power to the raw eerily threatening backwoods snarl whilst on the songs that include Megan’s harmonies she too has huge quality.
Shame we didn’t here more from her really. Having said that, this recording is so good that I think we will be hearing a lot more from this tremendous duo in the future!