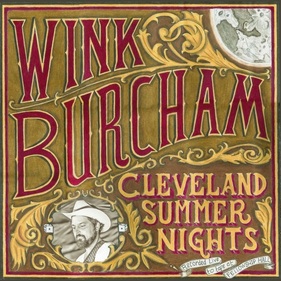 I reviewed Wink Burcham's previous recording, a compilation of his first two studio albums, on this site last year and was absolutely captivated by the quality of his music, ultimately making the recording one of my favourite albums of 2015. In fact it came to mind that last year's review, on which I didn't mention any songs individually, could in many ways be superimposed onto the review of this new recording. Then, after further listening sessions it struck me that if 'Cleveland Summer Nights' warrants any kind of rethink it would have to be that the incredible quality of his earlier music has actually increased by at least a 'notch' on this tremendous album that will most certainly be vying for the upper echelons of many 2016 'Albums of the year' lists.
Wink is a native of Tulsa, Oklahoma, an area that has been producing talented musicians for a very long time, the first ones that I was aware of being the late great J.J. Cale and Elvin Bishop. There are even more modern day artists from the area who are making people sit up and take notice such as the wonderful Carter Sampson, John Moreland (maker of my album of the year 2014), The Paul Benjamin Band, Jacob Tovar and the Saddle Tramps, Dan Martin and Wink himself, along with numerous others, as well as being home to some excellent indie labels such as Horton Records; fairly obviously a thriving roots music scene.
As with his previous recordings, the thirteen songs on Winks new album all create a powerful and varied impact with his vocals being the glue that binds everything together. There is a mix of blues, country and folk although no genre is dominant; it is more a case of Wink's natural style having plenty of each and the blend being so good that whilst styles may be recognizable on individual songs they are not overwhelmingly so. The albums opening song, Case of the blues, is a case in point with its easy going blues feel, excellent guitar sound and lovely warm expressive vocals from Wink, alongside a chunky bass and percussion. In some ways it is a song that epitomizes the laid back 'Tulsa sound,' musically if not lyrically and yet it is more a blend of blues with any number of disparate elements that are brought together to form a virtually indefinable genre. The title song Cleveland Summer Nights, is an absolutely gorgeous ballad that includes steel guitar alongside some excellent guitar playing with Winks expressive vocal perfectly evoking a laid back story. In so many ways it is an almost classic modernization of country balladry. There is another tempo change on Hallelujah (gonna rest my soul), a swampy funky tale with solid percussion and deep bass allied to the 'Tony Joe White' swampiness and the addition of brass that, rather than spoiling things, emphasizes the diversity that can be found within the wide boundaries of 'country music.' Whilst there is a warmer melodicism to Winks vocals, I'll never leave the honky tonks in so many ways provides a thread that goes back to the classic honky tonk recordings of Hank Williams and some of the greats of the late 1940s and early 50s, both in style and quality. His vocals are as usual excellent as is the instrumentation, particularly the steel guitar on this modern day honky song. A pervasive dark sadness hangs over For the ones we leave behind another excellent song, and one on which the darkness is emphasized by the arrangement, which at the same time has a beauty and a warmth that again adds variety to a tremendous album. Cowboy heroes and old folk songs is another gorgeous country song, this one approaching a mid tempo that has a little western swing in it. It is a composition that Wink has returned to on several occasions with the song having been the title track of 2015s compilation and could almost be referred to as a classic 'country and western' song.
Cale Tyson and Sturgill Simpson are justifiably said to be the new stars of the edgier side of 'real country music.' Why no one has spoken about Wink Burcham in the same way completely beats me. He is certainly their equal and given the profile that his tremendous recordings, particularly this one, deserve I'm pretty sure that anyone hearing him will agree.