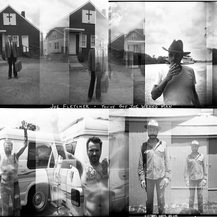 There is little more than acoustic guitar accompaniment on these twelve stripped to basics, highly literate songs that are performed with a raw vocal and little or no finesse! In other words a tremendous collection that has it's background in raw American folk but there are also detectable strains of blues and country all blended together seamlessly and performed in Joe Fletchers own unique style.

There are elements of comedy, tragedy and most points in between by this, new on me but, highly accomplished musician who has a higher degree of rawness but follows in the footsteps of Townes in his ability to turn any situation into a song.

Often on albums this sparse, varying degrees of self consciousness are evident but that is not something Joe suffers from. Stylistically he has an attitude that says he may not be the classic 'generic singer songwriter' but this is what he does and there is a tremendous feeling of honesty and integrity on this recording that I'm sure to keep coming back to time and time again!