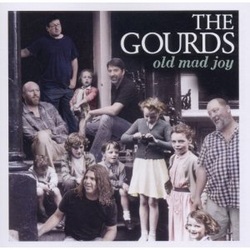 The thing about the Gourds style is that they have similarities to many other bands but don’t actually sound like any of them. This is their tenth studio album of consistently high quality alt. countryish, good time bar band roots rock and whilst they never appear to have a structured sound as such, the variety of sounds and textures they do use somehow makes them instantly recognisable as the Gourds. For those that have never heard of the band their music has elements of ‘The Band,’ with perhaps a little of the Little Feat and Los Lobos feel but without coming anywhere near to actually sounding like any of these esteemed legends. They really are that sort of band! Much of their sound is built on a ramshackle bar band feel that can only be attained by having total confidence in their own and fellow band members abilities to imbue any song with anything that is required. This in turn only comes from the long hard miles of touring and spending large amounts of time together. Of course, musical talent does no harm either.
The band consists of Kevin Russell on vocals, guitar and mandolin, Jimmy Smith, vocals, bass and guitar, Claude Bernard plays accordion, guitar and vocals, Keith Langford on drums and percussion and finally multi instrumentalist Max Johnson (ex-Uncle Tupelo/Wilco) is the newest permanent member. Some huge musical talent in there then! Most of the lead vocals are shared between Russell and Smith as is most of the song writing although they all add to the harmonies and Johnson has a songwriting credit and a lead vocal on one song on this album.
As with most of their previous recordings, don’t worry if the album doesn’t grab you right from first play, have a little patience and it will slowly but surely grow on you. Drop the charges is an excellent rocker that is propelled by Smiths straining vocals and is followed by a gorgeous Russell ballad in Two Sparrows on which he sings with a great depth of feeling and with atmospheric harmonies and admirable restraint shown by the rest of the band. Immediately after this is a Smith penned and sung ‘chugging’ good time boogie, Drop What I’m Doing, these three songs all being different in style and tempo but still only the tip of the iceberg when it comes to the Gourds mastery of their music.The Johnson penned Haunted is more country rock than most of the rest of the album but fits seamlessly into this diverse mix of roots music with it’s excellent harmonies and occasional steel guitar, in fact on Ink And Grief Russell comes close to the same territory with the steel driven country ballad! Just to prove they can do it, there are even a couple of songs that have elements of soul in them, and so the album goes on, with the listener never being able to anticipate what comes next. Unpredictable, slightly ramshackle and probably not their best album but with a band such as the Gourds who cares, every album is an entertaining listening experience.