DANNY BARNES - GOT MYSELF TOGETHER
(Ten years later)
​ 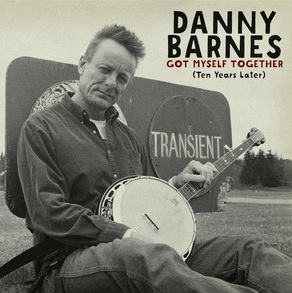 I've been a fan of the mighty 'Bad Livers' since their very early days, having purchased their debut album 'Dust on the bible' soon after its release in 1990 and their final release 'Blood and mood' in 2000. I still play those recordings on occasions and really miss their idiosyncratic take on country, 'hillbilly,' bluegrass and much else that sat them firmly in genre of one! Danny Barnes as lead songwriter, vocalist and banjo player had the highest profile, although they were very much a 'band' and for anyone who has followed his post 'Livers' career the ride has always been fascinating, if sometimes holding less appeal, certainly for me, sometimes taking those idiosyncrasies far beyond what most fans would have expected. After the 2005 release of 'Get myself together' he went into what he calls his 'electronic period,' a time of experimentation and as I said, it didn't always appeal to me, but it was always interesting and where would we be without the great experimenters? Probably listening to bland easy listening 'country' could well be one answer!
Public demand and the owners of Eight 30 records were fans of the album so thanks to that demand Danny has re-recorded and released this update of the now ten year old (and out of print) album. Of the twelve tracks ten were written by Danny, one by Mark Graham and two public domain, with Danny playing all instruments, although it should be noted there weren't too many of those, any 'colouring' added to his banjo virtuosity being pretty much superfluous!
His often straining vocals won't be to everyones taste, although for much of the recording there is a releaxed warmth to his voice, but he makes up for any perceived  shortfall with strength of character, his dynamism, great originality and of course his banjo virtuosity.
The album opens with Get Myself Together, with the usual tremendous banjo playing supporting Danny's deep but manipulative vocal on a light but excellent ballad that has the feel of something the late great John Hartford may have come up with. We go back to the 'hillbilly' textures on Rats Ass, with an atmospheric vocal from Danny and some superb banjo playing that really does evoke life in a small Appalachian town or village! The public domain Cumberland Gap is a tremendous banjo instrumental with thudding percussion helping to create an incredibly rural atmosphere on a tune that is a genuine 'classic.' Let Your Light Shine On Me is a a real 'homespun' tale that is easily imagined as someone playing to a small crowd on his front porch or at a 'hoedown' with the crowd adding to the chorus. Finally, Get It On Down The Line is another song that is thematically hillbilly, being set around coal mining and moon shine with even the solitary banjo evoking a high lonesome sound as does Danny's distinctive vocal.
I don't know if I would describe this, and by association it's 2005 predecessor, as his best since the Bad Livers but it is an excellent album that shows off Dannys huge talent in playing modern 'hillbilly' music in an entertaining, completely natural and virtuosic way. Long may he continue on his experimental path, just as long as he returns to his roots on occasions! For those unfamiliar with Danny Barnes his back catalogue makes for fascinating investigation and I really wouldn't want to be without my 'Bad Livers' album!