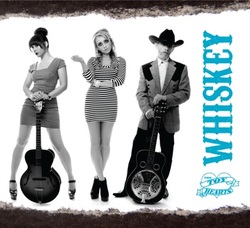 This terrific recording is brimming over with gorgeous female vocals and harmonies, exceptional playing and some excellent songs, all on a beautiful country/western swing album from a band that hails from Birmingham, England! They have their own natural style within the country music field that confirms they come to this music courtesy of their own enthusiasm and feel rather than as copyists, with every song that they tackle on the album having an air of believeability.
The band is made up of Hannah Johnson on lead vocals and mandolin, her sister Sophie on lead electric and acoustic guitars as well as harmony vocals, with dad Stewart playing steel guitar, pedal steel, banjo and dobro. Don’t run away with the idea that this is just another ‘family band’ novelty album though. All three are extraordinarily gifted musicians with an expertise on everything they choose to play that few can better. On this recording the sound is rounded out by Eamon McLoughlin’s tremendous fiddle playing and harmony vocals, Danny
McCormack on piano and Dean Beresford on drums with John Potter on double bass laying a really solid foundation.
Whilst‘originality’ in music is always a moot point, they do have a slightly different feel to most other bands that play in a similar vein, but it is that superb vocal and instrumentation blend that gives this album that little
extra. Their blend of classic country and western swing with a little blues and jazziness, gives the whole recording a nice flow and whilst it certainly  doesn’t have the edginess of alt. country, neither is it the cloyingly sweet country music often found in the country charts. Just the right blend of sugar and spice! Of course all this is helped by Hannah’s evocative lead vocals that not only sound gorgeous but are also full of character and with just enough edginess to avoid being ‘sweet!’
Of the twelve songs on the album six are written by the Toy Hearts, with the quality being good enough to blend well with songs by such eminent writers as Wayne Hancock, Floyd Tillman and Cindy Walker. The album kicks off with a classic piece of western swing, Bring on the Swing, a band original that ambles along nicely with Hannah’s emotive vocal and various instrumental highlights, almost as an introduction to some of
what is to follow. What does follow is a beautiful tale of heartbreak in the title track, Whiskey, again, a very
good band original with some beautiful playing, singing and harmonies, followed by Cindy Walkers western swinger I hear you talkin,’ another first rate song with just as excellent a performance. This is how the album continues, one terrific song following another, never being quite sure what style is to follow but knowing it will be good! Mary
Jane is a slight variation on the preceeding, in as much as despite the country instrumentation it has a really nice jazzy feel, compliments of Hannah’s versatile vocals and some tremendous fiddle playing.  There is a beautiful version of Wayne Hancock’s Thunderstorms and Neon Signs,  their own Pass the Jack is a lovely mellow swing
ballad and Another right note has some nice dobro playing on an excellent folksy country song with more gorgeous
sisterly harmonies, whilst finale Ridin’on down is a nice speedy piece of country that has an early rock ‘n’ roll feel, with it’s excellent bass sound the highlight.
The more I listen to this album the more impressed am I with the instrumentation and production sounds. There is a terrific clarity to each and every instrument as well as the vocals that makes it almost impossible to pick
out a particular highlight, such is the all round quality. There is a distinctive sheen to everything on the album but nothing that has that cloying glossiness that is so formulaic. In this generic field you will be very fortunate to hear better this year!

NOTE: The Toy Hearts are playing at the All Saints Centre, Lewes, Sussex
on a Union Music Store promotion on 30th June.