SUSAN JAMES – DRIVING TOWARD THE SUN 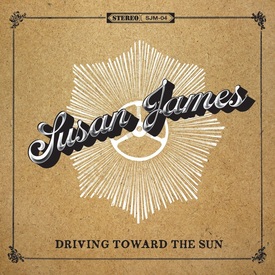 
This gorgeous album might contain just eight songs and clock in at little more than half an hour but those songs and
everything else about the recording is of the highest quality. It will be promoted as ‘country music’ and it certainly is, but it is thankfully much nearer to the boundary than to the centre, or ‘mainstream’ as it is usually called.  Apparently Susans talent
has gained the attention of Ryan Adams, not surprising when you listen to this excellent album that has a lovely Californian country rock feel. It’s probably splitting hairs and is certainly an over simplification, but I tend to look on the ‘mainstream’ as being an either partially or totally sanitized version of what country music could or perhaps should be. This album, despite the soft often mellow feel, is neither. Whilst Susan’s voice is beautiful there is a slight, virtually indefinable edge, that removes the cloying sweetness many suffer from and instills a lovely atmosphere that is full of character and believability.
The warm southern Californian feel is not surprising, when you consider Susan was actually born and raised in Los Angeles. There is a strong sensation that evokes the wide open spaces and long straight roads of the U.S in much the same way as some of the early country rockers, thanks in part to the warm production and arrangements but enhanced by Susan’s lovely feminine relaxed vocal style.
The recording is produced by Ryan Ulyate, a man who has also produced Tom Petty and George Harrison, and is obviously sympathetic to the requirements of these excellent songs that paint some quite heartrending pictures. And yet, there are also little oasis of quite uplifting sentiments as the character that inhabits these stories lifts herself to a new level of optimism when she commits herself to a new life. It’s an extraordinary gift to be able to write songs with such powerful stories and include so many lovely melodies, although it is to be hoped that these
beautifully written tales come from her imagination rather than experience due to the lyrical content that is in the main about lost love.
As a measure of the esteem in which Susan is held, bearing in mind this is only her second solo album, she is helped out by artists of the quality of Neal Casal on guitar, Don Heffington (Buddy Miller, The Jayhawks, The Wallflowers, Kathleen Edwards) on drums and Eric Heywood (Son Volt, Richard Buckner, Alejandro Escovedo, Peter Bruntnell) on guitars, with Susan herself on all lead vocals, acoustic guitar and mandolin.
The album opens with the title track Driving Toward The Sun, containing Susan’s lovely vocals and chiming mandolin on a gorgeous song that relates the tale of a broken relationship and her drive towards a new life. It has a lovely sunny, dramatically uplifting chorus, as if now that the decision is made the pursuit of a new life is underway and being grasped with both arms! This is in many ways a sub theme that is detectable throughout the album, giving it that upbeat feel that contrasts with some of the lyrical content. Anniversary is a lovely ballad with chiming melodic electric guitar and acoustic guitar with her soft vocals tugging at the heart strings whilst trying to save a faltering relationship, followed by House Of Love another evocative ballad about a marriage breakup with lovely steel guitar and at times ethereal vocals, with perhaps a glimmer of hope in the final verse? The other excellent songs on the album follow a similar theme although Wandering edges towards being a love ballad rather than lost love and the final song, the beautiful Mission Bells is a quite sublime tale of reflections on life.
This beautiful collection of songs combine to produce a hugely accomplished upbeat album that contains a fair portion of downbeat songs, but there nearly always seems to be at least a glimmer of light at the end of the tunnel. Susan is a hugely talented singer and songwriter who is surely close to being a household name wherever, for want of a better description, Californian country rock is played. She certainly is in my house!