MY DARLING CLEMENTINE – THE RECONCILIATION? 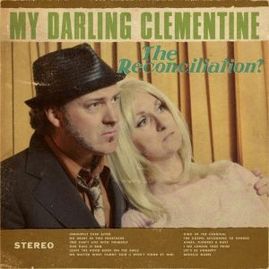 
The problem with many of the original country duets from the 1960s and 70s, certainly from my point of view, was that
everything was perfect, from the vocals to the over production and to such a degree that everything seemed saccharine sweet, even the darker songs. That was a big problem for someone who was getting into what in those far off days passed as ‘rock music’ but also more particularly the blues that I had been introduced to in the very late 50s and had led back to the few recordings available of old blues and ‘hillbilly’ music. To be confronted by a string orchestra, big budgets
and the perfect vocals of George and Tammy amongst many others (most of whom were/are hugely talented) eventually led me and some of my contemporaries to bemusement and eventually amusement because to our ears it was all so incredibly
‘twee!’ Of course when you are young the larger the numbers of people that like something the more steely your determination to dislike it and find something that hopefully few others will like! So it was that George, Tammy, Porter, Dolly and numerous others were totally ignored and vilified as something that was not ‘real music’and the sheer horror at what they were achieving before the very eyes and ears of the young ‘me’ has in many ways shaped my musical tastes ever since. I don’t listen to very many country duets from those decades even now, with the possible exception of Gram and Emmylou, still preferring the old rural blues as well as old and modern day ‘hillbilly’ music, although I can now appreciate, if not particularly like, the talent and perfection of those duets. All right, none of that rhetoric means anything in terms of this albums quality but I only mentioned it to explain just how good a ‘country duets’ album has to be before it can really get my attention!
So it was with some trepidation that I approached this album, although I should say in my defense that I’ve always had a liking for the edgier duets of Johnny and June Carter Cash. With that in mind I hoped that this combination of Michael Weston King, who I have long been a fan of, and his wife Lou Dalgleish would fall nearer to the Cash category and it was with a huge sigh of relief that it proved to be thus! In other words a genuine
throwback to the country duets that were prevalent around the mid twentieth century but with little, if any, of that cloying sweetness. Very much country music for the twenty first century by two hugely talented singer songwriters!
What they have done with this excellent album of one cover plus twelve of their own originals is update the genre by making the songs perhaps thematically more relevant today than they would have been fifty years ago and more importantly taken away that glossy sheen and the dense instrumentation that made the originals often sound so ‘twee.’
The nucleus of the backing musicians is formed from Richard Hawley’s tremendous band, with a few additions such as sax and steel guitar to ensure a little diversity. Both vocalists have a track record of consistent excellence in making music with Michael having been lead singer with top alt. country band ‘The Good Sons’ and latterly a number of very good solo recordings. Lou has gone from dancing to also making solo recordings before the pair got married and ‘My darling Clementine’ was born. Whilst both are tremendous vocalists, none of the edges are smoothed off, bringing more character to the genre than I thought possible. Lou’s voice is at times quite stunning and could have been made for this music whilst Michael, thanks in part to his alt. country background has a lovely edginess to his powerfully expressive vocals, with the combination emphasizing the lyrics rather than getting bogged down in vocal histrionics. There is fire, passion and commitment in the performances, as well as a lovely tenderness when required, leading me to think this pairing  is a match made in heaven, or very close to it!
Whilst they both love much of the original duet music they have the advantage of being able to look back at
mistakes made by those originals. Certainly this album contains songs that hark back to the original topics of falling in and out of love, themes that can’t really be taken lightly, but I get the impression that there is often a little
humor just below the surface of some of the songs. No outright belly laughs, just an impression that whilst they take their music very seriously the same is not applied to themselves, another factor that may account for the lack of
‘tweeness.’ I’ve deliberately not mentioned any specific songs simply because they are all uniformly excellent, taking the listener on a roller coaster of emotions throughout, and whilst the albums foundations lay in the already
mentioned themes there are other serious subjects such as an incredible tale of domestic abuse and another that relates to mortality, as well as life in a circus and a tribute to the late great George Jones!
If you have a love for the classic country duets you really need to own a copy of this album. I read somewhere that this could be at the peak of the genre in Britain. I would add to that the fact that it more than holds it’s own with most of those on the other side of the Atlantic as well. Great album!