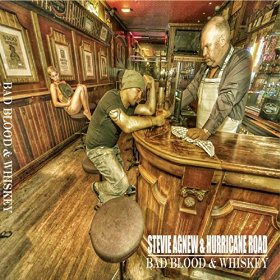 On first play of the first track on this album I actually wondered if I had made a mistake and put on the new recording by Don Henley. I'm not a lover of Henley's music as a rule but have to admit the man sure can sing. I hadn't made a mistake; it actually was the new recording by the huge talent that is Stevie Agnew and Hurricane Road and it is certainly true that anyone whose voice resembles Henley's is worth a listen. As with Stevie's tremendous debut 'Wreckin Yard,' this new album is worth far more than just a listen, in fact it has barely been off my c.d player for several weeks now. That Henley comparison is accurate up to a point, but Stevie actually has more flexibility to his vocal style that starts with an appealing rawness and can quite easily descend to deep and dark.
Stevie has been playing live for nearly twenty years, certainly putting him in the 'paid his dues' category and his profile has been raised by the success of that excellent debut album which received rave reviews and plenty of airplays. The core band is made up of Stevie Agnew on acoustic guitar, slide, harmonica and lead vocals, Chris Smith, drums, bass, bodhran, cahon, percussion, Chris Agnew on bass guitar, Jimmy Anderson, dobro, acoustic and electric guitars, Lesley Thompson, fiddle, Elaine Shorthouse on piano and backing vocals and Ali Bell, backing vocals. All of the songs were co-writes between Agnew and Smith, who also produced, except for Drunk On You Again, which was written by Agnew, Smith and Elaine Shorthouse.
That little lot should give the potential listener a clue to what sort of sounds they can expect to hear and hopefully convince them that this album ups the quality a notch from that superb debut recording. The songs are driven by some tremendous melodies and beautifully descriptive stories, many of them easily qualifying as 'dark country,' although there are a few little oasis of light in amongst that darkness. There are stylistic twists and turns that spread Stevie's roots from traditional country to the far reaches of the various offshoots and sub genres bringing a tremendous diversity to the recording.
The songs themselves, as already intimated, are stylistically diverse but also beautifully poetic and with a degree of literacy that leaves most of his peers in his wake! They range from fiddle driven country, often including steel guitar and banjo to more of an alt. country sensibility, even veering into a Celtic folksiness and a sometimes dark Waitsian world! Despite that diversity there is a lovely flow to this album that is bound together by Stevie's tremendous vocals and an originality that makes it virtually impossible to compare this talented band to anyone else.
The album opens with I Don't Know How To Leave Her, a tremendous ballad that tells of the conundrum of a love that is a no longer existent. It is slow and moody with gorgeous harmonies chiming steel guitar and a heartfelt vocal from Stevie that had it been sung by Don Henley would probably have charted! Whiskey is an excellent questioning ballad from someone who thinks his unacceptable ways may have gone too far, and he's probably right! It is a slow moody song with excellent harmonies and a nice sparse arrangement. Drunk On You Again starts with a piano intro to a gorgeous descriptive tale of desperation over a lost love, with lovely fiddle and steel guitar adding to a slow sad song. That is followed by Bad Blood, a hugely atmospheric tale that moves at a funereal pace with lyrics that wouldn't shame Tom Waits. The arrangement is sparse, with an excellent dark Stevie lead vocal and haunting ethereal harmonies from Ali Bell. On Ghost Of Yesteryear the intro is courtesy of a lovely bright fiddle sound with acoustic guitar before Stevie's raw melodic vocal comes in supported in the background by a banjo on an incredibly descriptive tale that because of the foot tapping tempo and sheer melodicism will soon become an 'ear worm' for anyone who hears this dramatic tale. Finally In The Shadows is a song that has a country feel, with a lovely melody and beautiful harmonies on a sad tale of unrequited love, simply because he never had the courage to offer his! A gorgeous steel guitar and haunting fiddle enhance the sense of hopelessness felt by the songs narrator.
Repeatedly listening to this incredible album makes me feel like having another moan about record companies and 'mainstream' fans but for once I'm not going to! It is a fact though that if the record/c.d buying public would give Stevie and other roots artists approaching his talent a chance, they would realize that the manufactured artists that sell in huge quantities are left in the wake by talents of this calibre. This album of Stevie's is an example of roots music that touches various mainstream genres but never falls into them, instead he chooses his own unique and highly original blend. Long may he continue to do so if it means releasing albums of this supreme quality.