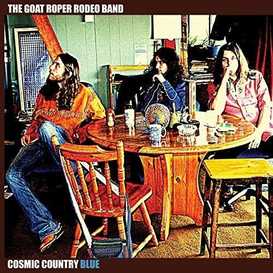 The first and only time, so far, that I've seen the Goat Roper Rodeo band play live was at the Maverick festival a couple of years ago. They are a trio who hail from North Wales but seem to have a psychic connection to the old rural hillbilly music, albeit updated for the 21st century, even their natural vocal styles being sympathetic to the old days. I was so impressed I bought their debut album from the Maverick store (Yes, that's right. I spent my own money on it!) and was equally impressed with that recording, titled 'Hail the Remedy,' as I was with their live performance.
The lead vocals have that twangy 'untutored' sound that gives the impression of being born and raised in the high Appalachians of old, rather than Wales, but they have an unusual warmth and are capable of great expression on these twelve songs, some of which sound as if they may have come from many decades ago! In spite of that there is a powerful modernity to their music that, apart from perhaps 'modern old timey,' defies categorization, although many will detect a strong 'alt. country' leaning.
All of the songs were written by the trio which consists of Tom Davies on bass and vocals, Jim Davies, vocals and guitar and Sam Roberts on rhythm guitar and vocals. Whilst there is input from the other two, Tom who is quite prolific, writes most of the songs, although on occasions they will all write or arrange together and if one of the other two come up with a good song that can also get used. The trio has an advantage over most bands thanks to these excellent songs that are dominated by those edgy untutored hillbilly lead vocals that create an unusual atmosphere, but when you add those harmonies their sound is quite astounding, giving the band its appealing uniqueness.
The album gets underway with I got room on which Tom's natural lead vocal harks back to the time of the old 'hillbillies.' There is an excellent guitar and bass sound and some tremendous harmonies on a song that has a tongue in cheek element, all in all setting the scene beautifully for what is to follow. Old heartache is a gorgeous ballad that includes the lovely steel guitar, with a little percussion, acoustic guitar and some more excellent harmonies, with Jims lead vocal showing a little restraint as befits an excellent lovelorn ballad. The extraordinary harmonies that couldn't be better blended are the highlight of the stunning Old Joanna another gorgeous ballad that has steel guitar and piano support with an excellent lead vocal from Tom. Had the song been written in the late 1960s or early 70s Gram and Emmylou would have received huge acclaim for recording it, but it wasn't so they didn't, but their version would probably not have been a match for the vocal qualities on this incredible version. Rhythm of love is propelled by a chugging guitar sound on an excellent composition that, as with most songs on this tremendous album, has an unusual sound. The piano, a shuffling percussion and excellent guitar and bass create a sound that goes from a smooth(is) late night feel to all out honky tonk with some tremendous harmonies that allow Sam's expressive vocal performance full rein. Finally, a lovely slow mellow duet with Jim and Toms Everly like vocals on a gorgeous song on which Jim takes occasional lead. There is a lovely restrained guitar sound that allows the unusual harmony vocals to perfectly express the songs sentiment.
To my ears the dominant factors on this album are the extraordinary harmonies closely followed by the unusual lead vocals but then you have to take into account the  excellent songwriting alongside the varied tempos and arrangements that add further fuel to an album that is not only brilliantly conceived and performed but is also completely unique! How on earth they can follow this I don't know but I look forward to finding out! A tremendous album by a hugely talented trio.