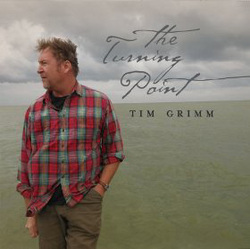 
Tim Grimm has the sort of warm lived in voice that we all associate with someone who has seen and experienced most of the ups and downs that life can throw at us and still continues to plough on
with an indomitable spirit. It’s either that or he is a very good actor, which he probably is with his background in films! It’s unfair to joke about his being in films really because that often conjures up pictures of a star being indulged  by all and sundry, but this man appears to have left the film (but not Theatre) world behind and as far as musical talent is concerned he is the ‘real deal.’
This is the first of his seven albums that I have really listened to, for no other reason other than the fact that each of his previous releases seems to have flown just under my radar! I didn’t know much about him and neither did I know anyone else who seemed to, both situations I have now started to rectify, and on the strength of this new release I can’t wait to explore his back catalogue. Certainly if previous
recordings are even half as good as this one they will be well worth investigating. I’ve seen him compared to many other edgy singer songwriters but personally keep coming back to Sam Baker, although Tim Grimm, with his warm
expressive vocals, has a much better and more melodic singing voice and more of a rural sound. He blurs the line between folk and country music in a similar way to artists such as John Prine, and it’s easy to imagine his songs are rooted in everyday life perhaps in a farming or rural community.
All of the songs on this excellent album were written by Tim Grimm except for the traditional Rovin’
Gambler, Family History by Beth Lodge-Rigal and there are three co-writes with Jan Lucas. Most of the instrumentation is acoustic and there is always a lovely easy on the ear open feel to each song, giving plenty of breathing space to everything that is going on. Amongst the musicians who help out on the album are Harpeth Rising, Cindy Kallet, Beth Lodge-Rigal, Jason Wilber (John Prine’s sidekick for many years), Jan Lucas, Connor Grimm and newgrass band, The Underhills. As you would expect the playing is excellent and the lead vocals and
harmonies create the variety of atmospheres essential to these tremendous story songs that are played with such conviction.
The Lake is a slow moody album opener on the story of a family returning to a rural life after time spent in the city. It’s not a simple tale and includes several other strands that lift it to the stratospheric quality of singer songwriters such as Prine, Clark, Baker, etc. As the song meanders along with a nice acoustic guitar it is given a further lift by the inclusion of Rebecca Reed-Lunn on banjo plus an occasional atmospheric harmonica. King Of The Folk Singers is a terrific song that name checks Cash, Walker, Elliott, Kerouac et al on which Tim at times adopts Sam Baker’s talk vocal style and whilst there is more instrumentation it is never overdone and still has a  rural dramatic quality. This is followed by the sparse treatment of the classic traditional song Rovin’ Gambler, with an excellent vocal, acoustic guitar and harmonium. This version is up there with the very best versions of the song and is both heartfelt and evocative. On Title track The Turning Point there is a nice acoustic guitar and banjo with lovely fiddle and bowed bass and atmospheric female harmonies courtesy of Beth Lodge-Rigal on the chorus, on an incredibly epic tale of a soldier and a reverend. It is an intensely descriptive and atmospheric tale that becomes more harrowing with each verse. It could very easily be a song that could end up as a ‘classic’ of folk music with those dramatic  lyrics and the sympathetic instrumentation. Another tremendous song that many will be playing is Anne In Amsterdam, a gorgeously descriptive story with banjo, violin and cello on what is an exceptional and emotion drenched tribute to Anne Frank inspired by  Tim’s visit to her house, with Cindy Kallet’s lovely harmony vocals adding to the sad emotional feel of hopelessness.Indiana is a trip in the time machine back to the 18th century American wilderness that includes some lovely harmonies as well as acoustic guitar and banjo on a story of life and love in those far off days.
As I said earlier these quite riveting stories have their roots in rural life and are as descriptive and well thought out as those of most of the greatest singer songwriters of the last four or more decades. Certainly Tim is of that quality on this album with his songwriting and is a better vocalist than many. As I finish writing this review I’m going to start looking for his previous albums with bated breath, knowing that this man really is a huge talent who needs to be heard by far more people. Buy the album and settle down to listen to some of the best story songs around, told by a singer songwriter who is genuinely ‘the real deal!’