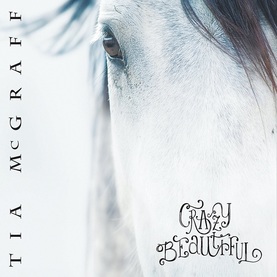 Tia McGraff is a lady who could do very well in mainstream country with her lovely expressive vocals, beautiful melodies and her thematically varied songs. Some are punchy and hard hitting, some are soft and gentle and whilst I mentioned the dreaded 'mainstream' don't be put off by that. The sheer quality suggests there is something for all tastes but with simple arrangements, by that I mean probably not simple, but lacking a full orchestration that many deem necessary in country music! Every instrument on these gorgeous songs is essential to the balance of the album and is arranged in such a way that the personality of the instrument is allowed to shine and provide admirable support for the power, drive and beauty of Tia's vocals.
I would suggest that this beauty of an album sits on the boundary of the mainstream country music industry where Tia could hopefully get the best of both worlds in terms of commercial value and being far enough away from the centre to retain control of her music. It is certainly worth retaining because I would hate to hear these excellent and varied songs drenched in an over produced instrumentation. Not that I'm suggesting that is all that happens in Nashville but there are artists I can think of who are similarly talented but who are lost in the crowd.
The album was recorded in the three different locations of Austin, TX, Nashville, TN and Ontario, Canada and was produced by Tommy Parham who co-wrote all of these excellent songs with Tia. Whilst there are at least a decent share of ballads there is nothing samey about the songs thanks to Tia's beautiful expressive vocals and the well conceived arrangements. The only slight reservation I have is that on occasions I felt Tia's vocal was a little overwhelmed by the instrumentation, but it's more a personal observation than a criticism. She is able to bring so much subtlety to her beautiful vocal expression that on a few occasions they are easy to miss, but I guess with repeated listening sessions, no great hardship, most will pick up on her ability to express so much.
The fire is a beautiful and often quite harrowing story that starts with just Tia and acoustic guitar before the sound fills out with chiming guitar, bass, percussion and banjo on a song that is incredibly perceptive and in many ways descriptive of the human condition. A really classy country song. There is an unusual blend of banjos as you should perhaps expect from a song with the title Baby's got a banjo. As the song gets underway it is soon joined by Tia's gorgeous expressive vocal and the chiming sound gradually fills out and takes on a quite epic feel. Mesa gold has a lovely fiddle and guitar start on another absolutely gorgeous ballad. The restrained banjo, fiddle and excellent harmonies ensure the song benefits from being relatively sparse, allowing the subtleties in Tia's voice to be expressed and highlighted. Forever has a nice chugging sound rooted by banjo, guitar and another excellent harmony vocal on another beautifully written and expressed tale, with little additions to the sound that provides a little diversity overall. Finally, a chunky banjo introduces Leaning on the everlasting arms and is soon joined by Tia's gorgeous vocals and with no other support her voice is allowed to express all of the subtleties that anyone could desire.
Tia McGraff is a lady who has just about everything she needs to be a huge success. I can see that if she succumbs to Nashville 'over' production failure is not really an option, but it would be a shame to drown her voice in an even fuller instrumentation because it is the subtleties in her vocal presentation that gives whatever she sings a certain edginess and consequently an advantage over her 'peers.'