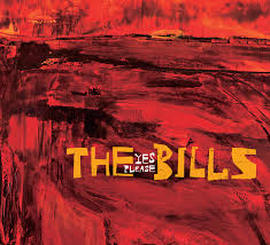 
This five piece band are so inventive with their ‘global roots music’ that I can’t get away from the feeling that the amount of diversity they show should equate to at least a full two discs for every album they release to give any listener the chance to get the feel of what they are trying to achieve! It is almost like an exercise in musical virtuosity and a drive to include any random musical influence that any of the talented members can come up with. When
you see them described as playing ‘globally inspired’ music it is not an exaggeration! Their influences come from pretty much everywhere on planet Earth and include such diverse musical fields as folk, gypsy jazz, country, bluegrass, even classical, but strains of those genres seem to absorb influences from yet other countries and if there is a problem it is that the huge diversity ensures there is not really a Bills signature sound. Of course  conversely it also means they can’t be fitted into a neat little musical slot and allows them full rein with their tremendously broad of scope musical experimentation that usually, but not always, works.
The lineup on this album consists of Marc Atkinson on mandolin, guitar, banjo and vocals, Richard Moody,
fiddle and vocals, Chris Frye on vocals and guitar, with Adrian Dolan on fiddle, piano, accordion and vocals. There is also Joey Smith on upright bass, Joby Baker, percussion and vocals and Oliver Swain plays upright bass on track 4. Production comes courtesy of Joby Baker and the Bills, pretty much ensuring the recording would fall in line with their vision of where they wanted the music to go. All thirteen tracks are band originals, some written in pairs, some solo but five are Atkinson/Frye co writes and of the total, five are instrumentals. Virtually every song, whether vocal or instrumental, has an epic feel, something that is occasionally detrimental to the album as a whole, making it sometimes difficult to focus on where a particular song is coming from or going to, such is the uniqueness of their  musical concept. They are fairly obviously a highly skilled band of multi instrumentalists added to which the
vocals are always very good as are the harmonies and the album has an upbeat feel although the instrumentation sometimes has a rather crowded feel, or perhaps it’s just the occasionally unusual blending of instruments and genres!
Having no previous experience of The Bills music I was expecting something that was essentially a blend of perhaps folk music and bluegrass or country. The first track, the Frye/Dolan penned Hallowed Hall went some way to confirming this, albeit with a slightly orchestral feel at times, possibly thanks to fiddle and violin being used in tandem, but the soaring vocals added to a song that got the album off to an exciting start. Not The End is a speedy hard driving north American folk song with a Cajun feel that includes excellent harmonies and slows down mid way midway through when it seems to take on an almost Parisian café/French filmic quality in the instrumentation before picking up the pace again. Scotch Bonnet  is an instrumental exercise in diversity that veers from a popular classical feel to celtic folksiness, on to gypsy jazz and back again, immediately followed by Pandora’s In Flames a very good accapella folk song with an excellent lead vocal and a tremendous harmonic blend by the band. Gale
In My Sail is a really dramatic song thanks to the powerful instrumentation that often has a European gypsy feel and includes a blend of violin, accordion, mandolin, banjo and viola! The Gardenton Waltz is another instrumental that often has a classical feel and as the final track on a very good album probably helps to sum up this diverse and unique musical genre that seems to consist of just The Bills!
In many ways the album is far from being a relaxing listen and is musically quite challenging at times, but it is essential to stick with it. I didn’t like the album very much at all on first listen but it is slowly drawing me into the Bills unusual musical world. It is not an album that I am ever likely to love but there is no getting away from the
fact that this unique and extraordinarily talented five piece have recorded an album that contains elements of such
disparity that their unique talents will gain them far more fans than detractors. There is probably little they can attempt that they can’t master, as they pretty much show on this album, so rather than trying to understand the
recording from the start just sit back, relax  and let the music soak into you!