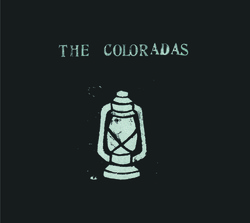 Whilst listening to the songs on this excellent album I can’t help but think that Roy Davis has either learned some very hard lessons in his young life or he has a brilliantly vivid imagination. Whichever it is, those stories have certainly translated well into songs on this album that seems to almost be old timey acoustic music played by an alt. country band! And what an excellent band they are, consisting of Roy Davis on guitar, vocals and most of the songwriting, Bernie Nye plays banjo, guitar, harmonica, vocals and wrote several brilliantly evocative songs, the highly rated Joe Walsh, (No, not a refugee from the Eagles!) on mandolin and vocals, the excellent Amanda Kowalski on upright bass and Steve Roy plays fiddle and vocals.

There is a ramshackle homemade quality to the recording that enhances the rural backwoods feel of the songs but there is absolutely nothing ramshackle about the tremendous playing. Despite the rough recording, it is always a highly listenable album that somehow with repeated listens, thanks to the strength of the songs and the playing, seems to gradually have some of those rough edges smoothed out. Davis takes lead vocals on nine of the compositions with a voice that ranges from a keening hillbilly quality to a slightly smoother sound that has a Ryan Adamish feel! Bernie Nye’s vocals are an excellent contrast, with a raw rasping sound that can’t help but conjure an eerie  atmosphere, thus giving the album an extra lift, which when added to his epic songwriting augurs well for his future. Maybe a solo album beckons, as it has for several of his colleagues in this loosely knit floating aggregation of musicians.

As already alluded to Davis’s songs are not simple boy meets girl and falls in love optimistic country songs; quite the contrary, they at seems seem to go through the meeting process before the realization dawns that love is after all unnecessary and a miserable loner life is actually preferable. A case in point is album opener Misery, a song that has a nice mandolin backing his raw vocals and excellent harmonies, then the fiddle comes in on a story that seems to say looking for love and happiness is not worth the effort, as does This isn’t love Natalie, with it’s front porch feel and lyrics that struggle to define love. Down on my knees sees Davis in Ryan Adams on his front porch mode on this unhappy song about being beaten down by a hard hearted lover, with the song redeemed by the beautiful tones of a mandolin! Crooked Youth again has a Ryan Adamish feel, but don’t buy the album thinking it is going to mimic Adams. It most definitely does not. The similarities lay more in some of the vocal inflections and the songwriting that can sometimes come from the darker side of relationships plus the take it or leave it attitude. Red Dress sees Bernie Nye take lead vocals on a tremendously atmospheric murder ballad, driven along by his raw rasping vocals and with his beautifully haunting banjo giving a rural backwoods feel. A Brand New Day is another excellent Nye effort, this time just backed by an acoustic guitar on a sad story that tells of a last effort to try to break away from the past.

Despite the sparseness and the sometimes demo feel of the recording this is an album that gradually reveals more depth with each subsequent play. The songs certainly contain more dark than light but most people will be able to relate to many of the emotions expressed. Davis, we already knew as a hugely talented musician and songwriter but Bernie Nye is a revelation with his songwriting and vocals. Ultimately, a really good album by a team of talented people who not only have a lot more to offer, but in all probability will deliver with interest.