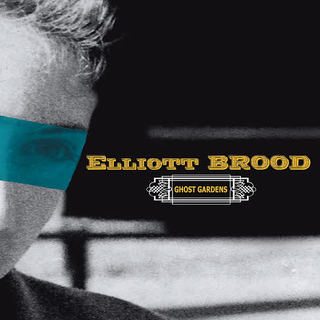 There are not too many bands like Elliott Brood. Rephrase that. There are not any bands like Elliott Brood! They are a string band, but can they really be if they include drums? They're also an alt. country band, but driven by string band instrumentation how can they be? A conundrum is one word that comes to mind, especially if you're trying to find a label to hang on this hugely talented trio who hail from Hamilton, Ontario, Canada. Safer to simply say they are a great 'roots band' that play alt. country string band music! Even that doesn't really do them justice, with some of their songs including strong folksy elements; in fact there are even occasional snatches of blues, rock, mellow balladry, a smattering of  ambient sounds and more! Getting the picture? Me neither! This is their sixth album and I can vouch for the fact that along with the previous five, 'Ghost Gardens' is an absolute stunner that covers all of the above mentioned bases and then some, but always with their own recognizable, if idiosyncratic, sense of rootsy style, although this album does experiment with their sound a little more that on previous recordings.
Despite the apparent lack of direction depicted by the above description there is a unity to their music that actually binds everything together in a recognizably Elliott Brood style and with a virtually seamless flow. In 2011 this talented trio won a Juno award for the incredible 'Days into years,' an album that was inspired by World War 1. The trio consists of Mark Sasso on lead vocals, guitar, banjo, ukulele, harmonica, and kazoo, Casey Laforet on guitar, lead vocals, backing vocals, bass pedals, keys, and ukulele, and Stephen Pitkin on percussion, sampler, and backing vocals.
The recording clocks in at just under half an hour but what an incredible musical journey is packed into that half hour. I think it likely that anyone hearing the album will hit the repeat button immediately after the last song finishes, however many times they have already done so!
There is a strong haunting feel to the vocals throughout the album and some of the arrangements are quite unusual in the blend of instruments with the percussion but even on the slow moody songs there is a powerful dynamism. There is a strong sense of experimentation throughout the recording but one that extends and enhances their style rather than moving in an entirely different direction on this album that still contains elements of old timey and alt. country but with so much in between.
Listeners could be lulled into thinking this is going to be a 'typical' album of string band music as the very first song, 'Til the sun comes up again gets underway with the sound of a banjo. It won't be long however before the suspicions of this recordings uniqueness are aroused as the music takes off with a raw yet melodic lead vocal and thudding percussion on an excellent song that is full of fire and dynamism with some atmospheric band vocals.  2-4-6-8 is a song that starts off with a slightly suppressed crashing percussion, gentle banjo and guitar and a virtual otherworldly lead vocal on a slow burner. Very soon it starts to speed up as the sound fills out, at times having a Clash like London Calling feel, then after about the half way mark the electric guitars really kick in leading the song into an almost cacophonous near finale before everything slows down again on this epic, virtually cinematic tale. The percussion starts things off on The Fall before being joined by a deep bass guitar and the otherworldly vocals and harmonies, again with a lovely chiming guitar for company on a song that has a haunting quality that is both deep and wistful. Final mention is of Adeline, with the guitar accompaniment for the lead vocal starting the song off, joined by the plaintiff banjo and eventually piano and vocal harmonies on a gentle slow moody love ballad that can't really be compared to anyone else. The lead and harmony vocals have a raw yet intensely melodic feel that whilst restrained match the instrumentation for dynamic quality despite the slow tempo that is also quite sparse.
This is a tremendous album that occasionally has a welcome lightness but in the main is deep and quite dark although much of that depth is simply due to the extraordinary atmosphere that this band creates with their unusual arrangements and the vocals that whilst often raw, have a powerful haunting quality. Even after countless listening sessions and despite the shortness of the recording, each time I play this album there are further revelations from these eleven tremendous compositions and performances, almost as if this is my first listening session. There are very few albums you can say that about and long may Elliott Brood continue to make albums that include great songs, excellent performances and arrangements, and possibly above all these, so much of interest and uniqueness going on.