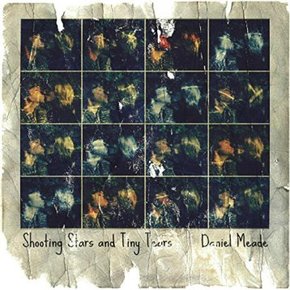 This is the third and perhaps most unusual Daniel Meade album to be reviewed on this site, with both of its predecessors being in the mix for my albums of the year for 2014 and 2016. 2014s recording was the tremendous 'Keep right away' and in 2016 we had an album that I still play whenever I get the chance, 'Let me off at the bottom,' on which he was accompanied by his peerless band The Flying Mules' who feature the work of his gifted guitarist Lloyd Reid. I mentioned unusual, simply because this album was conceived and recorded at Daniels home in Glasgow, with him supplying the sparse instrumentation and vocals all built around a conversation Daniel had with his girlfriend (now fiancée!). In fact Daniels own words will explain the concept better than anything I can write. He emailed me recently with the following:
"The album is all home made, and I wrote and played everything on it, designed the cover etc. Started out as nothing more than a wee songwriting/recording project really, gave myself no more than an hour to write each song and no more than 4 hours to record each of them. Some came in 20 minutes; some were cut in first takes. I didn't allow myself to read any lyrics while recording either so they changed from take to take, as did the arrangements, was a lot of fun. The songs were all inspired by conversations I'd had with my girlfriend about our pasts, present and future so I thought it would be a nice idea to put them all together as a kinda birthday present for her, that being on the 10th Feb (hence the release date). But I ended up liking the songs, sound and feel of it so much I just thought I'd put it out myself." That explanation virtually defines the word 'spontaneous,' but how does the album shape up qualitatively? In a word, brilliantly!
Daniel is the possessor of a warm, incredibly expressive vocal style that has a natural 'earthiness,' perfectly suited to the songs he sings and indeed the loose genre of alt. country that arguably suits him better than most labels. Some people just have that extra something special in their vocal and lyrical makeup that makes them equally as good live as on record and Daniel Meade is one of those people. He is similar in quality to artists such as Jeff Tweedy, Jay Farrar and Ryan Adams in as much as the emotion in his songs and vocals is unforced and as natural as it's possible to be, able to portray myriad textures, tempos and emotions. The honesty shines through from his and his fiancés open hearted conversations, making this an album that can truly be described as a love album but one that is rooted in realism rather than, as is often the case, a 'twee' idealistic take on a complex subject. As with life and love the songs range from slow and moody to mellow and reflective and on to upbeat and optimistic ensuring this tremendous recording can be listened to over and over again. I've deliberately not picked individual song highlights, my feeling being that they are all of an equal quality and relevance, each following the thread of two individuals' hopes, regrets and aspirations, with cherry picking a few seeming to lessen the impact of others.
Don't run away with the idea that this is a 'stop gap' home recording either. The ten songs are at least on a similar quality level to those on Daniels previous albums and as has already been intimated, the album has a conceptual quality but with its varied tempo's, emotions and themes keeping the interest going through a variety of loosely formed and related  genres from country to folk and blues.
Buy a copy and you can not only enjoy these tremendous stripped down songs but you can also bear witness to a conversation (or threads of it!) between two people comfortable in revealing their innermost feelings to each other. Successful partnerships have been built on much less!