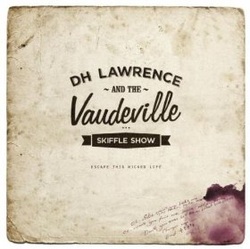 
This short but very sweet six track album that clocks in at barely twenty minutes is as good as anything I’ve heard so far this year, made doubly so by the fact that this Nottinghamshire based band of outlaws (geddit?!) are so obviously having a great time on an album that was actually recorded in Sherwood! The recording consists of songs that mix various elements, such as old timey, folk (both American and British) and even alt. country into a blend that is best described as Americana. Huge credit can be given to the band for the fact that all of the songs are band originals and judging from the quality the comparisons  to the likes of the Felice Brothers are, on the strength of this album, not overly exaggerated. Despite those comparisons they have very much their own natural style, something that is obvious from the first play of this excellent disc, that contains songs of lost hope, death, drugs, outlawdom and lot’s of booze!
There is an appealing ramshackleness (in a very positive way!) to everything on the album, with the core of this very good band consisting of four members, Misk Hills Mountain Rambler III, The Reverend D. Wright, Sister Stevie Leigh - Goodison, Minin’Bill Kerry III and supplemented on this recording by various others. It’s just a wild guess, but I have a feeling the above are not their real names but they are perfectly suited to this atmospheric recording. The instrumentation is all acoustic and includes guitar, banjo, fiddle, accordion and harmonica with plenty of rowdyism! Whilst they are excellent on disc I’ll have another wild stab and say that an evening in this bands company at the ‘Dixies Arms’ (in Nottinghamshire) would almost certainly be hugely entertaining musically and otherwise!
Album opener Bluebird is a lovely slow ballad with banjo and fiddle, terrific vocals and harmonies with the
verses alternating between male and female on a dark tale of finding no peace in this life except in your dreams. White Jesus on first listen and without taking in the lyrics has the feel of a ramshackle drinking song until you really listen to those lyrics and then it becomes a sad tribute to a wife who in her efforts to get rich drinks herself to death from the ‘still’ that she built. It is a brilliantly evocative tale with excellent male lead vocals and support from the acoustic guitar and harmonica. Finally, The Pretty Girl With The Golden Hair has a gorgeous lead vocal from ‘Sister Stevie’ and just a sparse acoustic guitar on another sad tale, this time of a girl who no longer has any hope. The remainder of the songs are of the same quality and as usual on a short album of this quality it’s only real fault is that there are not more songs, but playing this album over and over again is no hardship.
As far as I’m concerned any band that collectively quotes Lonnie Donegan, the inventor of Skiffle, amongst their many influences that include Tom Waits, Old Crow Medicine Show and the Felice Brothers has got to be well worth taking notice of. This tremendous band certainly are.