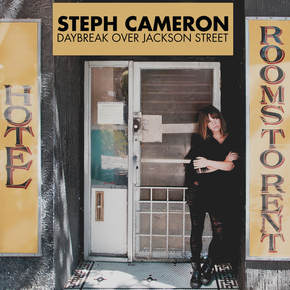 There must have been tens of thousands of album releases over the decades that have consisted simply of vocals and guitars. Of the ones I've heard there have been relatively few that held very much appeal and a minuscule number that I have felt the need to listen to multiple times. This may well say more about a lack of imagination on my part than the quality of music but music appreciation is very much a personal feeling rather than the 'following of a trend,' or at least it should be. As I see it, to successfully make an album with very little more than just voice and acoustic guitar the songwriting has to be of the highest order and enough in itself to hold the attention whilst including at the very least a few memorable and appealing melodies. The vocals need to have something that grabs the listener and if it is a female vocalist a simple and precise beauty along with perfect pitch is nowhere near enough; there must be plenty of character that can portray just about every emotion known to mankind. It almost goes without saying that the guitar playing must also be excellent although I should qualify that by saying that as a non musician it's difficult for me to judge anyone as a guitar player, although the playing on this album sounds pretty good! Very few albums I have listened to contain all of those elements but Steph Cameron's 'Daybreak over Jackson Street' does fulfill every one of those criteria, delivering on that excellence with interest!
I'm loath to even try to compare this talented lady to anyone else although it would be easy to do so, the stripped down sounds of a lady and guitar being not exactly uncommon. Any shortfalls in a bands performance are relatively easy to cover or at least disguise and comparisons to others have to be qualified by the fact that small differences in instrumentation or style can give a band a certain amount of uniqueness. Not so the solo 'folk singer songwriter with guitar;' everything is exposed and any mistakes or bum notes highlighted, meaning a young lady on her own (or man) except for the company of her guitar is something that requires a huge amount of nerve and a monster talent to succeed and it's pleasing to say that Steph Cameron has an abundance of both with the weighting being heavily on the side of the latter! This is Steph's second album and follows on from 2014s highly rated 'Sad eyed lonesome lady,' a recording I've yet to hear although on the strength of this superb album that is a state of affairs that will soon be remedied!
There is a flow and depth to the eleven self penned songs on this recording that in some ways produces echoes of the late Nick Drake but with a greater variety of emotional content on show and ranging from an appealing sense of melancholy to a sparky spirited upbeat attitude, all driven by her excellent guitar work and lovely manipulative vocals. The songs are both reflective and highly descriptive, almost literally painting word pictures that anyone should be able to interpret and whilst she is the possessor of a lovely voice she is able to delve into the bluesy side of her nature on songs such as On my mind on which the sound is actually filled out with the insertion of a harmonica! As I've already said the sound is necessarily sparse but with the very occasional insertions the album has a more varied sound. Likewise California, another beautiful song but this one not just including harmonica but also gorgeous harmonies which may well be Stephs own voice blending with her lead.
Unlike many albums that are rooted in a 'folksy' sparse sound this tremendous sophomore album has subtle stylistic variations that seem to become apparent and solidify  after multiple listening sessions There is a deep, dark folk atmosphere on songs such as the final track Peace is hard to find that also contains a distinct bluesiness which contrasts with the rural countrified feel of California, albeit in a subtle manner It is probably these 'subtle' variations that gives this tremendous album its signature and maintains the listeners interest long after albums by many of Stephs musical peers have been consigned to the ever expanding 'finished with' shelves! Daybreak over Jackson Street is an excellent album by a hugely talented young lady who is destined for a long and successful career.