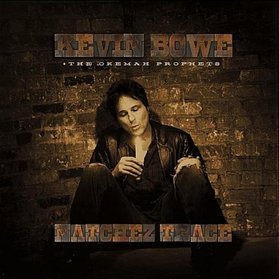 
Kevin Bowe is a singer, songwriter and producer who has had and continues to have a career that is difficult to précis. It has included stints with Paul Westerberg’s band, writing for and with, as well as producing, artists such as Westerberg, Jonny Lang, Etta James and many others. He and the other two members that make up the band also tour with Freedy Johnson, who along with Westerberg, Scarlet Rivera, Tim O’ Regan, Nels Cline and Chuck Prophet, again amongst others, help out on this difficult to label album. He hails from Minneapolis a hive of roots band development that includes the Replacements and Husker Du from what now seems those far off 1980s and includes in his list of influences, unsurprisingly the former, as well as artists such as
the Byrds, Bob Dylan and Steve Earle. He has even written songs that have appeared on two ‘Grammy’ albums one of which, the late Etta James’ ‘Let’s Roll,’ included four of his compositions and that little lot barely scratches the
surface. It should give the uninitiated some idea of Bowe’s extraordinary talents though!
He possesses a nice warm vocal style on the country oriented songs but can change into a powerful rock voice at will, which helps him to cover so many disparate styles and gives this very good sixteen (some mixes have seventeen) song album a little cohesion that it would have lacked were it not for his and the bands musical abilities. Despite this, those numerous styles will not appeal to everyone, with a couple of people that I’ve played the album to having said that they think ‘the album is all over the place stylistically.’ They are correct about that but of course many will love the album for that very reason and as already stated, the quality of the performers holds everything together.
The core trio consists of Bowe himself on guitar and vocals, Peter Anderson, drums and Steve Price is on bass and vocals with help from the already mentioned various other artists. All of the songs are written by
Kevin Bowe with the exception of John Lennon’s I Found Out, Randy California’sNature’s way and four co-writes, one of which was with Paul Westerberg.
The albums kicks off with two ‘country’ ballads, Fallen Satellites and Long Goodbye, with Bowe’s excellent vocals in a nice warm mode, with lovely steel guitar on the former and jangling guitars on both. These two could probably lull the listener into a false sense of what is to follow, but the next step up is with the third song, In Too Deep. It is a very good mid tempo country song with banjo and keening fiddle driving the sound, then followed by Power Trip, a song that doesn’t include much of a nod to country on this mid tempo roots rocker, with keyboards, guitars and Bowe’s vocals much harsher than on previous songs. We then have a couple of songs that probably qualify as classic ‘power pop’ before eventually going back to another beautiful country ballad My Favorite
Pain with it’s lovely steel guitar and twangy guitars on a gorgeous country lost love ballad with uplifting harmonies on the chorus. This takes us halfway through the album and gives an idea of what is to follow on the homeward leg of the journey! There is raw rock ‘n’ roll a la Rolling Stones, a very good version that I’m sure the writer would have approved of in John Lennon’s I Found Out, more country, rootsy rock and power pop, as well, as a very good
reading of Randy California’s Nature’s Way before we get to the end of what is becoming a seemingly epic recording
thanks to the variety of styles included.
There is always a nagging concern with an album that has so much diversity that its scope is just too broad, but at least those styles all fit under the ‘roots umbrella’ and the songs are so well written, produced, sung and
played that ultimately it is probably best referred to as an album that contains something for everyone!