BEN BEDFORD –WHAT WE LOST 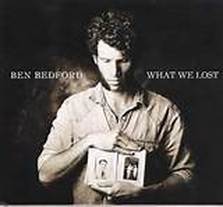 
This excellent album mixes a strong folksiness with elements of country music and whilst it is weighted in favour of folk the blend  gives
the album more variety, particularly with the inclusion of some excellent
electric guitar sounds that are never overdone. Generally the instrumentation feels sparse but actually isn’t really, being more a question of it being well selected and tastefully implemented. Ben Bedford possesses a warm expressive vocal style, full of emotion and believability ensuring the listener feels sympathy for the characters in these beautifully written and often thought provoking stories. His vocals are at times reminiscent of a young Billy Joel, but those that are not Joel fans shouldn’t be put off, it is only a vocal similarity, generically they are a world apart!
All of the excellent and varied songs are written by Ben Bedford except The Ballad of Harlington Wood with Ben having written the lyrics and Chas Williams the music. The songs are poetically descriptive tales based on a
variety of themes, many of which don’t crop up too often but even those that do have an uncommon slant to them. He seems to have the ability to come at a variety of subjects from a slightly off kilter direction giving the stories a
greater realism.
He is well supported on this, his third album, by the excellent Chas Williams, who plays all electric guitars, Peter Young on drums and percussion, Adam Gardner, bass, Dennis Wage on Hammond B3 and Ron De La Vega plays cello. He also has Kari Bedford on harmony vocals, with the two producers, Bedford and Williams, instinctively perfect timing of the use of her voice to give the songs a lift at the just the right point.
The album opens with John the Baptist with it’s nice acoustic guitar and organ backing, interspersed with
some beautiful electric slide guitar playing, with drums and bass laying the foundation on a song that musically has a nice easy going feel despite the lyrics depicting what can almost be taken as an honest sumnation of the human
condition! This is followed by the slow, moodily reflective, What We Lost, propelled by a lovely mournful cello and melodic guitar on a heartfelt emotionally sad tale about looking back, but knowing in his heart that the past can’t be recaptured. Cahokiarises to mid tempo  with a gorgeous electric guitar sound plus drums, bass and keyboards on
an atmospheric beautifully put together song that is a paean to (the little known in Britain) America’s ‘lost city.’ Vachel is a lovely powerfully dramatic song with acoustic guitar, drums and beautifully melodic electric guitar, and
organ on a song about the at times soul destroying difficulties of being an artist of any description, whilst Fire
In His Bones is similarly, another slowish dramatic tale, this one about being a travelling blues musician, with the melodic guitar and organ adding to the strong evocative atmosphere that ultimately is an atmospheric tribute to
Charley Patton, encapsulating in just a few verses the life of an itinerant blues man.
Every song on the album has a powerfully dramatic story with none ever getting above a moody mid tempo. The writing is highly descriptive, the singing excellent and the instrumentation perfectly suited and played to get the best out of some‘mini epics,’ even including an example of the relatively modern day ill treatment of native Americans, that rather than rework the ‘Wounded Knee massacre,’ as many have, instead relates the just as powerful, but without the fatalities,  1973 protest that took place at the Pine Ridge reservation in The Ballad of Harlington Wood. Powerfully evocative stuff, a feeling that runs through this excellent album from start to finish. If your preference is for hard driving folk or country rock this album might not be that appealing, but give it a chance and it will slowly inveigle itself into your consciousness, as it has mine. Of course, if you like slow moody story driven folksy country songs you will no doubt reflect, at a later date, what a classic of that loose genre this gorgeous album is!