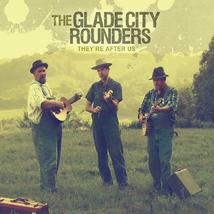 Glade City Rounders – They’re after us (Self Released)
This trio of virtuoso, multi instrumentalists from Tennessee actually define ‘good time’ music. Although they are reputed to be sensational live, this tremendous album goes a long way to explaining what they are about. Were it not regarded as an insult I would say they are a classic ‘hillbilly’ string band. There is fire, passion and a huge amount of skill in these ‘old timey’ songs that have probably never been played or sung better. If you buy the album prepare to be uplifted by this incredible trio.
http://gladecityrounders.com/Home.html


June Star – Pull away (Self Released)
This is a brilliant album that after just a few plays is up there with, what for me was a classic, 2001s ‘Telegraph,’ a recording that is genuinely in my top 20 favourite albums ever! Weeping steel guitar allied to great songs and one of the most evocative vocalists in the alt. country genre. It should be a crime to not have at least one June Star album in your collection and if you start with this one you can have a real treat working your way backwards. Great album, great band, buy it!
http://www.junestar.com/
Full review will follow.


The Vagaband – Medicine for the soul (Eggsong Recordings)
Were there time it would take a few thousand words to describe this tremendous recording by the Norfolk, UK based eight piece band. Fairly obviously there is a lot of varied instrumentation which can often come close to overwhelming the listener, something that is a weakness in some albums, but not in this one. That instrumentation provides a tremendous depth of colour to these beautifully written tales and Jose McGills evocative vocals are always excellent. He and co member Gregory Cook wrote most of the songs that go into myriad styles from quirky vaudeville, an occasional bluesiness, gypsy jazz and folk but the predominant feature is country, of which there are some of the best country ballads i’ve heard for a while, with tempos varying from slow to mid. The arrangements are well constructed which helps to prevent the blend of instrumentation from being too much and the playing is always excellent on this highly original, in fact virtually unique album.
http://thevagaband.co.uk/

The Whiskey Charmers
This is a tremendous debut album by a Detroit, Michigan based trio who bring a new slant to the normal clichéd view of the music that comes from that area, with nine tremendous songs of what is becoming known as ‘country gothic.’ The drumming is far more than just a foundation on this sparse haunting album of great beauty with the gorgeous guitar sounds of Lawrence Daversa and the stunning beauty of Carrie Shepard’s vocals on these mainly Shepard penned songs of loss, despair and tragedy. To use an oversimplification, if you like the Cowboy Junkies and Rachel Brooke, there is every likelihood you will love this gorgeous album.
http://thewhiskeycharmers.com/
(Full review to follow)

Sarah Borges – Radio Sweetheart
Sarah Borges is the possessor of vocal chords that are able to express a whole range of emotions from tender ballads to edgy, punchy alt. country rockers That are all self written by this hugely talented singer songwriter. She never seems to recognize country or folk music boundaries (or any other boundary if it comes to that!) although I always get the impression that is where the roots of her music lie, nor does she keep to classic themes, instead choosing to write her story songs about any subject that appeals to her. The tempos range from slow and moody to upper mid tempo rockers, all played and sung with great passion and drive and with total commitment, not just from Sarah but also her tremendous band who add so much colour to her music. This is another high quality album from one of the best singer songwriters around who really should be a household name by now, but there is still time!
http://sarahborges.com/

Bob Collum & the Welfare Mothers – Little Rock (Harbour song records)
Bob Collum is a tremendously talented UK based American singer songwriter of modern day country rock, and it’s true to say, much more! Fortunately his band is of equal excellence and he has a talented foil in Marianne Hyatt whose harmonies blend beautifully on this collection of songs that range from a pure country style to country rock and most points in between. Marianne also wrote and takes lead vocals on one track on this terrific recording that has a nice diversity whilst at the same time, a lovely flow. If you want an album that contains excellent vocals, very good songs, great arrangements and playing and also covers many of the bases within the edgier side of country you will be hard pushed to find a finer album than this quite addictive recording.
http://www.bobcollum.com/

Silo – Tall Tales (Self Released)
Clocking in at just twenty five minutes and eight songs this mini album is over all too soon, but the good news is that it repays with interest using the constant play button! It is a simply tremendous recording of two young Louisiana based women coming together to play their own songs, albeit with the addition of a brilliant version of the classic Shady Grove. With just their lovely edgy vocals and exceptional harmonies accompanied by banjo, acoustic guitar, occasional accordion and fiddle and a little percussion they carve out a pretty much unique sound that is a genuine blend of old timey and old rural blues all played and sung with an edgy heartfelt beauty. With repeated play it becomes obvious this duo is not only hugely talented, but the pair also have the natural ability to play these predominately modern compositions with an old timey sensibility, enveloping the listener in their eerie, old as the hills, atmosphere. Quite stunning!
http://www.siloband.com/music

Wrinkle Neck Mules – I never thought it would go this far (Lower 40 Records)
For more than a decade the Wrinkle Neck Mules have graced the upper echelon’s of the U.S alt. country scene with reputedly great shows and prior to this recording five albums of almost extreme excellence that very few others can match! It’s three years since their previous recording, the superb ‘Apprentice to ghosts’ and this new recording amazingly actually improves on that, what I thought to be, career defining album. On this album there are thirteen beautifully written songs, all played with their usual skill, excellent and evocative lead vocals and just as excellent harmonies from a band that in my house are up there with Son Volt and June Star. I have always cherry picked tracks for my radio shows but in the case of this album, being blindfolded and sticking a pin in the track list will bring the same result, a great song that could be anything from slow moody ballads to mid tempo rockers! A tremendous album by a tremendous band!
http://www.wrinkleneckmules.com/