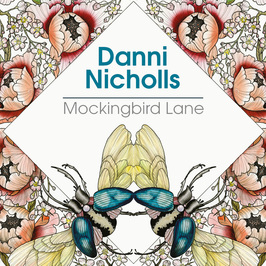 I first became aware of Danni Nicholls several years ago when I saw her playing live in Brighton, where she lived for a while, and was hugely impressed by her stage presence, songwriting and her gorgeous vocal qualities. Just Danni, her guitar and her songs pretty much held that audience spell bound as she has done on each occasion that I've seen her since.

This is Danni's second full length album, following on from two e.ps, and as was the case with that debut this was recorded in Nashville giving the lie to the premise that everything from that city has to be adorned by more instrumentation than is necessary and polished to a glittering sheen! Then again, I suppose that if the songs and vocals are of sufficient quality any over adornment is totally unnecessary which is most certainly the case with this beauty of an album, 'Mockingbird Lane.' That is not to say that the whole recording is sparse, but it is a fact that the arrangements and production are geared to getting the best out of Danni's vocals and songs rather than throwing money at the recording to make it 'commercial.' If the 'commercial country music' buying masses would only realize that artists such as Danni Nicholls are at least the equal of and often more talented than many of those artists who inhabit the country music charts, a whole new listening world of pleasure would be opened up to them!

​Whilst never straying too far from the country/alt. country music that Danni has always had an instinctive feel for, on this album there is a powerful soulfullness, something that is always present in the very best country music performances but on several of these songs the powerful soul element is perhaps even more pronounced.

She is a hugely talented songwriter who is as happy co writing as she is working alone as evidenced by the fact that seven of the songs were co writes and four solely by Danni. As with her debut, this recording was produced by Chris Donohue and she had artists of the calibre of Will Kimbrough and Brandy Zdan helping out with guitars and backing vocals, evidence of the regard in which she is held in the U.S. The tempo's, moods and themes are incredibly varied, ensuring the album always has a nice diversity and whilst it was an album that I enjoyed from first listen, with repeated plays it reveals even more depth. Several songs have a classic alt. country edge, several others lean towards a country soul style whilst others have echoes of classy country balladry which when all taken together equates to a recording that is never tiring and always holds the listener in thrall, thanks in equal parts to Danni's malleable, manipulative vocals, strong songwriting and the memorable melodies.

The album begins with a lovely solid drumbeat and some nice twangy guitar, soon joined by Danni's sultry vocal on Long Road Home, an excellent big country mid tempo ballad that retains some of the 'alt.' flavour, but as with many of her songs could easily cross over into the mainstream given a chance. Leaving Tennessee is propelled by a lovely breathy, hugely atmospheric vocal from Danni on a gorgeous country ballad. Her acoustic guitar is supported by a haunting steel guitar on a song that burns slowly and is more memorable for that with its quite otherworldly arrangement. There is even a song that has a little of the late night jazziness in its makeup. That is Look Up At The Moon with a lovely melodic jazzy guitar sound and a mellowness that conversely helps to bring out an indefinable edgy quality, later joined by a melodic deep 'twang.' Finally Travellin' Man is an upbeat rolling piano 'boogie' that whilst having an excellent arrangement is defined by Danni's powerfully dominant and 'sassy' lead vocal that manipulates the song in whichever direction she chooses.

​As can be gleaned from the above, Danni's vocal and songwriting abilities are second to none. She has the ability to be a dominant force in 'real country music' without resorting to the polish of the 'sequins and gowns' artists who are often the dominant forces in the country music charts. Nothing wrong with them if you want pleasant unchallenging music but if you would rather listen to an artist of real quality who uses her talent as her dominant feature Danni Nicholls is the lady for you! The bonus is that she can handle any style and if she decides to sing the phone book I'll be listening!