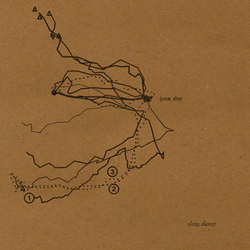 This is the seventh studio album by genre defining alt. country band June Star, with the only constant in that time being Andrew Grimm, songwriter, guitarist and classic alt. country singer. All of those recordings have been of an incredibly high quality, (although as yet I’ve been unable to track down a copy of ‘Shift, engage and initiate’) with plenty of diversity of tempos within the fairly loose alt. Country/rock genre. Personally I’ve always believed their 2001 recording, ‘Telegraph’ to be pretty much unmatcheable, being in my top ten all time favourite albums although despite this, every single one of their albums  is something to savour and all worthy of at least four stars of anyones money. On this album they steer a path that edges slightly closer to rock than most of their other recordings but is still a really high quality album that includes many of their usual strong country elements.
For this recording the band consisted of Andrew Grimm on Guitars and Vocals, David Hadley, Pedal Steel, Timothy Bracken, Guitar, Bass, Backing Vocals and at times Drums,  Mike Ward on Keyboards, with the production being courtesy of the band. Although not off putting the sound can seem a little too dense on some tracks, although some may actually prefer the album because of that! Having said that, where the sound is more sparse it serves to provide excellent contrasts, although on a few songs Andrew Grimms vocals do seem a little too far back in the mix. The choice of instrumentation and the playing are superb, with some of the guitar sounds being beautifully uplifting with the chiming, haunting tones and changes of tempo and atmosphere producing an album that few can match. The tremendous songs on this disc range in style and tempo from incredibly catchy rootsy rock to mid tempo country rock and some of the most hauntingly evocative ballads you are ever likely to hear.
This recording kicks off with the up tempo rootsy countryish rocker of Saint, a song  similar in many ways to the classic Jayhawks sound, but with more of an edge, even including a few woo hoo hoos and some tremendous lead guitar playing for good measure. The excellent Leaned, is more of a mid tempo roots rocker, whilst Undertow is back into country rock mode and similarly is also mid tempo. Time retains much of the same pace, with the addition of a haunting steel guitar on a song that warns against counting your chickens, because nothing lasts for ever. All of the ballads are superb, with the title track Slow Dance being a gorgeous, sad country story with beautifully evocative steel guitar and sparse chiming piano on a story about someone who still retains some hope of reclaiming a love lost to someone else, despite very little chance of success. Last Lock is another slow, moody song, again with some gorgeous steel and recounts a story that seems to be about a lack of communication, in fact, all of the ballads have this same haunting quality, something that is shared by many of the more uptempo songs.
In this day of manufactured stardom irrespective of talent, wouldn’t it be nice if talent was a prerequisite for success. Were that the case, Andrew Grimm and his highly talented band of musicians would be superstars!