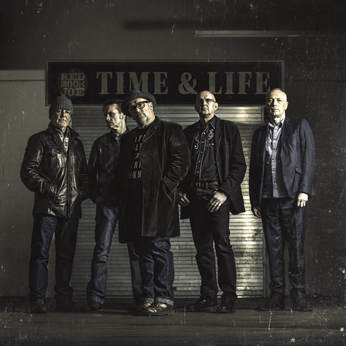 I reviewed 'Midnight Trains,' Red Moon Joe's first album in twenty years, back in 2013 and in a nutshell, was hugely impressed by the quality of their 'country rock.'  I wondered if that album was merely a conclusion to Red Moon Joe's unfinished business so didn't hold out too much hope for a sequel to that excellent piece of work. Wrong! They have come back with 'Time & Life,' an even stronger album than its predecessor, with a more expansive sound bringing more diversity to their often classic country rock sound. They are often referred to as an 'Americana' band but to me they are always country rock although often with a considerable dash of other roots elements in the mix.
Whilst the band originally formed in 1985 and toured extensively throughout Europe, they eventually split up in 1993, although 'unfinished business dictated that one day they would hopefully get together again which they eventually did in 2010 and are now playing sold out shows again. The band consists of Mark Wilkinson on vocals and guitar, David A. Smith, bass, guitar and vocals; Paul Casey on drums and vocals, Steve Conway plays pedal steel, lap steel, guitar, mandolin and vocals with Dave Fitzpatrick on guitar, mandolin, gob iron, banjo and vocals. From that lineup and list of instruments it is easy to see how this band has such versatility of styles, despite them having deep country rock roots. The songwriting credits provide further evidence of that versatility with most of them being involved in the process individually; Mark Wilkinson having written four, Steve Conway two, David A. Smith, also two,  Dave Fitzpatrick, one and a co-write between Wilkinson and Smith.
The album kicks off with Mark Wilkinson's Slow sun wheeling with its crashing guitars and percussion getting things really moving with input from the steel guitar as well before being joined by Mark Wilkinsons excellent, raw but melodic vocal on a mid tempo country rocker that further benefits from some excellent high harmonies from Justin Currie. Next up is the co write between Wilkinson and Smith, The high lonesome, and as the title suggests a much slower song, moodily starting with guitars, steel guitar and Wilkinsons evocative vocal supplemented by Cathryn Craigs beautiful feminine voice that exchanges verses with Wilkinson as the song begins to take off at a speedy mid tempo. The banjo further adds to the atmosphere that perfectly sums up the songs title, underpinned by the thudding percussion, throbbing bass and an excellent twangy guitar solo on a song that can virtually define the term 'country rock.' Elvis, Townes and Hank is another excellent Wilkinson original, and opens with a haunting electric guitar sound before being overtaken by the chiming piano and Wilkinsons vocal which are soon joined by organ, percussion, bass and occasional harmonies. The intervention of the weeping steel guitar adds further depth to an excellent 'tribute song.' Brass and harmonica enter the fray but the blend of instrumentation is never over done on a song that is perfectly paced by this band that instinctively knows exactly what their songs require. Hard road has a deep almost spooky, speedy sound on a driving rootsy rocker that includes clashing electric guitars, incredibly dynamic percussion and throbbing bass all played at breakneck speed with Wilkinsons vocal and guitar playing driving the sound ever faster. Finally, on Smiths Shadows the tinkling piano and organ slow things right down after the fire and drive of the previous song, with an excellent lead vocal from Smith on a powerful country ballad that includes a haunting steel guitar, throbbing bass and melodic guitars on yet another excellent song!
Now it remains to be seen how long this second great flush of creativity lasts; hopefully a very long time. If they keep making recordings of this quality fans will demand no less from this most versatile of 'roots' bands who seem able to master just about any sub genre that has sometimes strong, occasionally tenuous links with classic country rock. This is an excellent album by a great band.