PRINZ GRIZZLEY - COME ON IN 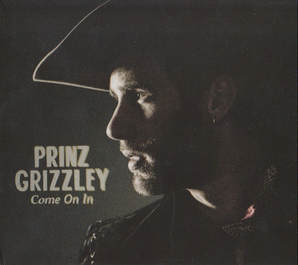 Until this year's Kilkenny Roots music festival I had been completely unaware of Prinz Grizzley but after witnessing their Sunday afternoon performance in a setting that didn't really seem right and to my ears was poor acoustically they became one of the stars of the whole festival with their often dark take on country music. It is often argued, and justifiably so, that country music didn't just spring from the English speaking world but from all over Europe. If that is so, and I certainly wouldn't want to argue against it then Prinz Grizzley hail from one of country music's homes, Austria! Not necessarily the first place you would think of but it is undeniable that the band brings its own originality and freshness to their music  that is recognizably deeply rooted in country music.
Live, there are less involved in the band but on this recording Prinz Grizzley consisted of band leader Christopher H. Comper on lead vocals, all acoustic and electric guitars, harmonica and tambourine, Oliver Varga played mandolin, banjo, piano, harmony vocals and rattling chains! Aaron Goldstein was on pedal steel guitar, Corina Gmeiner, harmony vocals, Rue Kostron, bass, Claude Meier played upright bass and Klaus Perez-Salado was on drums. Additional musicians were Philipp Lingg who played accordion on Personal hell, Johannes Bar, horns on Fiery eyes and Isabella Fink played cello on Tell me why, a list of artists that gives a pretty concise picture of the sound that potential listeners can expect. All of the eleven songs were written by Comper who, along with Varga, also produced the album. It can't be easy writing songs in your second language but you wouldn't notice that with the high quality of Chris Compers writing, added to which every song has a strong melody and a few are genuine ear worms!
Overall the album has a powerful 'country' feel but the unknowing listener will never guess that the band is Austrian; simply that they are different, no bad thing to boast of in a packed genre!  Christopher Compers dominant vocal style is also a little different to most and works perfectly with his songs on which the beautifully played steel guitar is as dominant as any other instrument, all of which are expertly played. The arrangements are excellent and on some of the ballads seem to create a quite epic atmosphere, with every song easily recognized as being generically deeply rooted in country music but having something different that veers away from the common place or mainstream. Several 'differences' but all essentially rooted in country music and bringing a little variety to the genre.
The first song on the album, Wide open country, opens with harmonica and acoustic guitar then the steel guitar flows into the picture leading to Comper's evocative, atmospheric vocal on a gorgeous slow moody ballad. The percussion and bass solidify the sound and add depth to a tremendous song that latterly has a lovely steel guitar break with harmonies adding to the full sound on a quite epic composition that starts with a mellow 'high lonesome' feel and then slowly builds the spacy yet dramatic atmosphere as befits the song title. There is just an acoustic and steel guitar opening Fiery eyes, along with Comper's excellent evocative vocal and gradually some harmonies segue in eventually joined by brass, giving a new perspective to a song that remains rooted in country but takes on a more expansive feel as the sound fills out with more backing vocals and a fuller instrumentation.
Again we're treated to the sounds of a gentle acoustic and steel guitar as they get Irene, a beautiful slow ballad, off to a melodic start and as the song speeds up there is a deep twangy guitar giving the song even more of a haunting atmosphere as it speeds up and slows down on an absolute beauty of a haunting country ballad. On Where's your fire gone there is a little twang on the intro that is dominated by the steel guitar with percussion, then the lead vocal comes in on an unusual song that if 'Nashville' got hold of it would be a big production ballad. Whilst it is a little denser with the band harmonies than some songs on the album it is a long way from being over produced.
Prinz Grizzley also has an excellent e.p out but if you have any interest in an edgy and completely original take on modern country music you won't find better than this excellent album that comes from one of the geographical homes of country music!