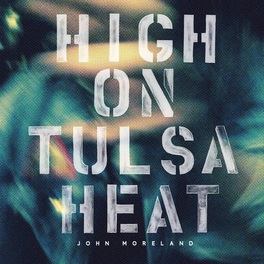 Is there a more soulful vocalist in roots music than John Moreland? In actual fact the question is rhetorical.  The answer is firmly in the negative as anyone who has heard any of Johns previous albums can confirm; although many will say there is no more soulful musician, period! The fact that he has few peers as a songwriter will also be case proven to anyone who listens to this great album, whilst his previous offering 'In the throes' was my album of the year for 2013.

His three solo albums of which 2011s 'Earthbound blues' was the first were preceded by three that he made with bands, one of which was with the 'Dust Bowl Souls' and the other two, the 'Black Gold Band,' all being uniformly excellent.

To John Moreland re-opening wounds in song is just part of what he is. A few other like minded singer songwriters attempt similar emotionally exhausting tales but very few achieve the depths of feeling that can be heard in John Moreland's vocals and lyrics. You can almost see his open heart and bared soul in these lyrical depictions of some quite gripping, often heartrending tales, most of which reflect a deep sadness, at times verging on self pity. It is as if there is nothing so sacred that he must keep it bottled up, unlike most of us! So are the stories true or are they great works of fiction? Perhaps we'll never know, but much of the emotional content must have been felt or witnessed firsthand, such is its intensity. Of course he is helped by a raw melodic vocal style that when put alongside his lyrics and his aptitude for arranging the songs with a perfectly selected instrumentation, is a match made in heaven. That self pitying aspect, when analysed, actually cloaks a realism in the emotional content of his lyrics giving rise to the possibility that John himself realises that his vocal style is ideally suited to portraying these depths of emotion and uses them accordingly.

An album of this quality makes it quite literally impossible to pick highlights from the ten beautifully written tales. Whilst the above comments portray the album as downbeat, the quality of the music and the arrangements actually give the album an incredibly uplifting feel. It is probably this contrast that projects John Moreland's talent way above the crowd. An example of this is the sparing use of steel guitar, a sound that always tugs at the heartstrings, in a way helping to deepen the emotional feel because of its sparing use. It is actually an aid to help create the atmosphere rather than relying on it totally, adding a little colour rather than throwing a blanket of its beautiful sound over everything. The same can be applied to the dobro and various other sounds, leaving the listener wanting more, which surely is exactly what a great album should be able to achieve. This one certainly does!