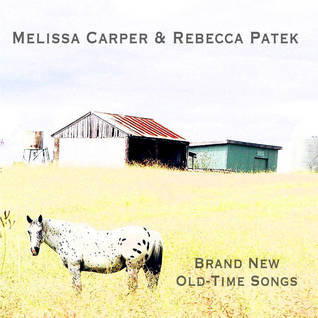 I first became aware of Melissa Carper when back in 2011 I reviewed The Carper Family's second album 'Back when.' That for me was one of the best albums of that year and preceded 2013s equally excellent 'Old fashioned gal.' The Carper Family were, and hopefully still are, a hugely talented trio of young women who to date have released just three albums, all essential listening for anyone claiming a love for modern 'old timey' music. Then in 2015 Melissa released her debut 'solo' album the equally wonderful 'Arkansas bound' an album so good that I still play it regularly!
Now we move on to her 'duo' recording and it's getting monotonous to say that this too is an absolutely brilliant album! See the thread that runs through them all? Go out and buy (or stay home and download) all of them! Her musical partner on this tremendous eleven song recording is award winning fiddle player, as well as being a hugely talented singer and songwriter, Rebecca Patek, someone of whom I was unaware until receipt of this wonderful recording. Having now listened to her tremendous award winning solo album, 2015's 'Come up and meet me' it comes as no surprise that she is the perfect foil for Melissa with her fiddle playing that is hugely evocative of 'old time' music and her vocals that perfectly blend with Melissa's to make this duo a match made in heaven.
Of the eleven songs ten are originals, two of which were co writes by Melissa and Rebecca, plus an incredible cover of Guy Clarks Death of Sis Draper. The album was recorded live at Homestead Recording studios, Fayetteville, Arkansas, with very little over dubbing and Melissa playing banjo and upright bass whilst Rebecca played fiddle and guitar, with both on vocals. Whilst all of the songs are modern originals, stylistically they seem to me to vary between the warm comforting elements of 'parlour music,' a sub genre that we hear very little of nowadays, and the high lonesome edginess of the old time 'hillbillies,' brought together perhaps under the banner of 'old timey music.'
The album opens with just fiddle and banjo on Three little birdies, together evoking a high lonesome 'holler' of old, rather than modern day bluegrass, then Melissa comes in on  lead vocals, cementing that 'old timey' flavour that is enhanced by the harmonies on this gorgeous, hugely evocative ballad. Whilst it is a modern day song it is unlikely that anyone not 'in the know' could possibly realize that, on this tale that were it not for the recording quality could just as easily have been recorded nearly a hundred years ago. That is a thread that runs through every song on this incredible album that is so powerfully evocative of many decades ago. The guitar and mournful fiddle get Guy Clarks Death of Sis Draper up and running with Melissa's deep powerful bass rooting the song and Rebecca on lead vocals with Melissa harmonizing on a composition that again could have been written a hundred or more years ago. This version is much slower than Clark's original and with a melody cleverly adapted from the ancient folk song Shady Grove. As a fan of the late great Clark since his debut album I'm almost loathe to write it, but I actually prefer this version, as I'm pretty sure he would have done too. The slow moody fiddle and  banjo combine to open Old sweet home,  a song that has a 'parlour' music flavour that harks back goodness knows how far with Melissa's lead vocal at its most expressive and Rebecca combining on harmonies to produce a powerful beauty that few if any can match. It is as if the two women got together to show the stunning quality and power of the old time music styles in a modern setting and with modern recording techniques to prove once and for all that over production and a rabid adherence to sanitizing modern sounds is completely unnecessary if the quality and belief in the songs is there. This incredible album proves the case beyond any doubt! Finally, we're treated to a completely unaccompanied vocal from Rebecca with Melissa joining in on harmonies to beautiful effect on Thought I heard you singing, again evoking a time that none of us knew and in an old log cabin that maybe didn't even exist in a long lost and forgotten location. If the intention was to provoke a reflective awakening of that long gone past they have probably succeeded beyond even their expectations.
Despite the songs all being new this album is very much the vernacular music of the 1920s and earlier, arguably more so than most of what has been recorded since. These two young women are many generations removed from those times but are so immersed in the 'tradition' and so talented that they are able to write and perform in a way that is completely true to the real tradition of 'country music,' rather than the sanitized country pop so prevalent in the late 20th and early 21st century, a 'development' that is often, and in my opinion laughably, referred to as 'traditional country music.'  This is real country music performed in a way the traditionalists of old would easily recognize but this incredibly talented duo is ensuring the style is as relevant now as it would have been a hundred years ago with their subtle modernity and their own highly individual take.