ORPHAN COLOURS - ALL ON RED 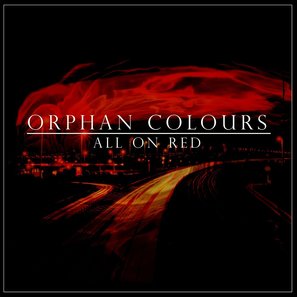 In terms of the lineup and talent Orphan Colours is a veritable 'supergroup' of the British American roots scene. Steven Llewellyn, Dave Burn and Graham Knight formed the core of the now sadly defunct 'Ahab,' whilst Steve Brooks has been playing drums with one of Britain's top bands 'Danny and the Champions of the World' and Fred Abbott was lead guitarist with another 'up and coming' band that seems to no longer be in existence, 'Noah and the Whale.' 'Up and coming' is really an often used misnomer. As this band, amongst many others, has found hard work allied to huge talent guarantees nothing in the music industry; dedicated management, expensive promotion and a huge slice of luck are usually the essential criteria and often, in the modern world, to the at least partial exclusion of the first two. This band has learnt much from their years of struggle and seem to have the management side cracked; as I've said the talent and hard work were always there, I suspect the huge promotional budget is not and as to the most ethereal element, luck, we have to wait and see but if this debut album is any sort of guide at all it would be criminal of the music buying public if this album doesn't bring this tremendous band to worldwide fame and fortune!
Steven Llewellyn wrote the songs for Ahab and carries out the same function on the eleven tremendous songs here, bringing perhaps a little more 'rock n roll' into the makeup of these compositions whilst never losing the rootsy country elements that made Ahab such an excellent band to listen to. This recording creates the impression that all are comfortable with not only the songs but with the depth of feeling and power of their performances ensuring the listener will know the band are playing in a style that is perfectly natural to them and are highly skilled in their ability to master everything from hard driving up tempo 'rockers' to slow moody ballads.
Drums, guitars and brass get the albums opening song, Start of something, underway before Steven Llewellyns excellent warm lead vocal comes in on an upbeat, lush mid tempo song that includes some excellent harmonies, with the combination of all those high quality elements letting the listener know this is no ordinary rock 'n' roll band. On Goodnight California the solid percussion roots an excellent ballad with the slightly restrained lead guitar and some exquisite 'southern California' lead vocals and harmonies on a song that probably slots comfortably into the 'country rock' genre and includes plenty of 'hooks' and a memorable melody. Again there are interventions from brass which I at first thought unnecessary but with further listening sessions it became absolutely essential in providing tempo changes and breaks in the intensity, giving the song an even more memorable and powerful perspective. A haunting keyboard sound gets Lonely lately started before being joined by mellow acoustic guitar, metronomic percussion and thudding bass with the lead and harmony vocals displaying a warmth and quality on this gorgeous ballad that few if any can match. Sarah is a slow moody ballad that has strong country elements with restrained steel guitar and violin adding to the mellow mix that includes percussion, bass, piano and guitar. Steven Llewellyn's lead vocal is at its expressive best, backed up by some more excellent harmonies on a song that has a lovely haunting quality.
It will be clear from the off to all who listen to this album that Ocean Colours is far more than just another excellent 'rootsy' band. Everything about this album oozes quality from the songwriting to the vocals, harmonies, arrangements and the playing, often displaying the warm edginess of the now long gone early 1970s 'Southern California' sound, in particular the harmonies. That statement needs to be qualified however by adding that potential listeners should not be expecting to hear music that simply apes that period. This is a band that uses its influences well and brings a huge slab of modern day originality to their difficult to categorize music. The real plus however is that their music has substance and depth, lifting them far above many of the bands from that period, or any other era if it comes to that!