WYNNTOWN MARSHALS - AFTER ALL THESE YEARS 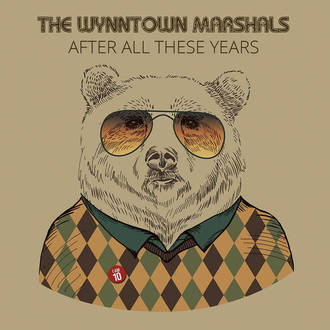 I never really like writing reviews of compilation albums, many of them failing to carry out their intention of representing an artist's work thus defeating the whole point of the discs existence. Over the years I have enjoyed listening to all of Wynntown Marshals consistently excellent recordings and whilst I can't remember every song I also don't think I could have made any better selections for this generous near eighty minutes sixteen song collection that represents this hugely talented modern day 'country rock' band better than most other 'best ofs' I can think of. In fact their generosity knows no bounds (or very few anyway!) with those sixteen songs including three previously unissued trackss that demanded to see the light of day such is the quality of Your time, Odessa and album closer  Different drug.
For the uninitiated, they are a band who will have plenty of appeal for fans of artists such as The Jayhawks, Tom Petty, Richmond Fontaine, Ryan Adams and many more perhaps even including Gram Parsons! The nucleus of the band consists of Keith Benzie on lead vocals, guitar and harmonica, David McKee plays bass Guitar and backing vocals, Simon Walker, drums and backing vocals, Iain Sloan on pedal steel guitar, guitars and backing vocals with Richie Noble on keyboards, all combining to produce a multi faceted and often diverse sound within the expansive borders of 'roots music' albeit with very strong country leanings.
The bulk of the lyrics and melodies on this disc were written by lead vocalist Keith Benzie, a man whose voice is as perfect for country rock/alt. country as any of the big guns in these loose genres. Those melodies are such that anyone who hears them will be smitten by the power, dynamism and uplifting qualities they possess which when added to Benzie's tremendous lyrics, vocals and the excellent arrangements and band harmonies leaves me thinking who needs the Eagles? They really are that good, something they proved when I saw them live at the Maverick festival a year or two ago. Of course they are not a one man band, far from it, with the unrestrained talent they have on show all excellent at every aspect of their work with every band member standing out individually as well as collectively and bringing something special to the band sound that virtually defines the term 'a tight band!'
The songs range from tremendous, often epic, mid tempo country rockers to beautiful, emotion drenched ballads, with nice variations in the instrumentation and arrangements that ensure that despite the length of the compilation, it never becomes tiring. In fact I've been finding that when the album finishes, for a short time afterwards life seems almost anti climactic having spent the best part of one and a half hours losing myself in these uplifting sounds! The advantage they have over most of their peers is that they don't merely copy the originators of this loosest of genres but bring their own Scottish background into the stories but without ever losing that essentially American 'country' element, ultimately writing and performing songs they, as well as their audiences, can relate to both in terms of story and location.
The Wynntown Marshals are known as Britain's number one country rock band, a title that all who hear them will find difficult to argue with; I would take it further and say there are very few if any better bands in that genre anywhere on the planet so buy the album and lose yourself in their warm melodic sounds, after which you will definitely want to explore the back catalogue of this fine Scottish band.